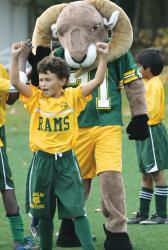 Julia Linger, dressed as the Wardlaw-Hartridge School mascot Rambunctious, celebrates during a 2013 middle school soccer game in Edison. PHOTO COURTESY OF WARDLAW-HARTRIDGE SCHOOL The first time Angelica Franco donned the Cougar costume and became the Colts Neck High School mascot, she knew it was something she was going to like.

“At the first game, when they put me up in the air, it was crazy to think that they can lift me, because the suit is so heavy,” the high school junior said. “Just being up there, I was like, ‘Wow, I’m up here in the Cougar suit.’”

Plus, she added, with nobody knowing who was under the costume, she could be as silly as she wanted.

Many local high schools have students like Franco: They dress as Dragons, Buccaneers, Mustangs and others, throwing miniature footballs into the crowd and dancing with the school’s cheerleaders, and showing unquestionable school spirit along the way. 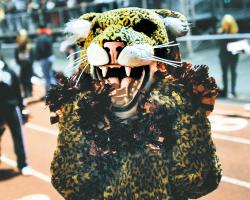 Jackson Memorial High School Jaguar Franco said she decided she wanted to be the Colts Neck Cougar because she didn’t play any school sports and wanted another activity beyond participating in the school’s Junior ROTC program. She plans to continue her duties as mascot into her senior year.

Her favorite part of being the mascot for the 8-1 football team is putting on a show with the cheerleaders.

“The thing I do at every game that everybody loves is that the cheerleaders put me in the routine, so they will put me up in the air,” she said. “They’ll put me up there and I’ll grab pom-poms, and they’ll throw me down and stuff. It’s pretty cool.”

While she was nervous the first time she wore the costume, entertaining the crowd as mascot has become second nature in the three months since, she said. Only a few close friends and members of the cheering squad know she is the student behind the costume. 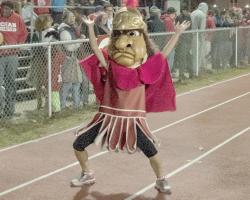 Ocean Township High School Spartan With most of the football season behind her, Franco has her school’s annual Thanksgiving Day game against rival Howell High School circled on her calendar. “They are actually going to give me footballs that say Colts Neck, and T-shirts, and I’m going to throw them into the crowd, because it is such a big game,” she said.

For Ocean Township High School senior Rachel Zacharczyk, the decision to be a mascot was made at the spur of the moment.

“It was a very impromptu thing, and I always looked at the previous mascots and thought to myself, ‘I’d like to do that at least once,’ ” she said. “It was a whim kind of thing that I did — I randomly asked the trainer if he could hook me up with the job. He tested me out on a soccer game and I was just like, ‘Oh, cool, this was fun.’ ” 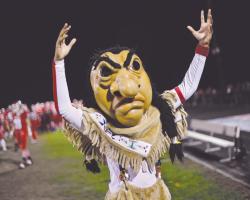 Manalapan High School Braves Zacharczyk decided to be the mascot despite being a three-season runner for the high school. She said the most rewarding part of playing the role for the 9-0 Spartan football team is interacting with the crowd.

“I like to dance a lot and dance in the crowd and just enjoy myself and look weird,” Zacharczyk said, adding that it is also fun to plop down randomly next to an unsuspecting fan.

Since nobody knew who was behind the costume, she could perform without worrying about what others might think, Zacharczyk said.

“I think the thing with the mascot is, I liked the anonymity of it … and people could look at me and laugh at me and not know who I am,” she said.

While football rules the roost for most local high schools, Julia Linger has had a much different experience as a mascot. A junior at the Wardlaw Hartridge School, Edison, Linger dresses as a Ram for a variety of sports, including soccer and volleyball. The school does not field a football team.

“It was really great performing in front of people and kind of letting myself go and just having a really good time,” she said. “I like to interact with people, so I’ll kind of tap them on the shoulder with my horns.

“A lot of times, whenever they score a goal or something, I’ll go in front of the crowd and do a dance or a move.”

For Linger, the process of becoming the mascot started two years ago, when she was a freshman cheerleader.

“I always kind of wanted to be the Ram. I always watched whoever was in the Ram,” she said. “I was always too scared to do it, because it was always guys who did the Ram. I put on the suit at the local fall fair for our school, and I just fell in love with it.”

But Linger said she has learned to pace herself when she is dancing around as the school’s beloved Ram, whose official name is Rambunctious.

“I do have to take frequent breaks and drink water,” she said. “The first time I did it, I didn’t really know I was supposed to take breaks, so I did it for two hours straight without breaking.”

Linger, who is also a varsity softball player and performs in school plays, compared her experience as a mascot with acting in theater.

“There are a lot of similarities, because you are performing in front of people and you have to dance and perform and get emotions from people,” Linger said. “The difference in being a mascot is that people have no idea that you are in there. You have to put on a show without people knowing that it is you.”

She expects to continue her job as mascot next year.

“The most enjoyable part is probably being able to free yourself from your own world and kind of forget about yourself in the moment and just let yourself go and do whatever you want to do,” she said. “You become the mascot, and you forget everything that happened in the day.”

Seeing the reactions in the crowd is also a great experience.

“Little kids come up and hug me because I’m the Ram,” she said.

“To get somebody to commit to it is hard, absolutely,” he said. “You can get someone who wants to do it once for the pep rally and the big game.”

A student has to really want to be mascot, he added, because doing so will cut into one’s social schedule.

“When you find a good one, as we have, you are just so grateful because it is a great boost and it helps entertain the audience on all levels,” he said.

Miran suggests that the student watch the mascots of professional sports teams to learn how to do the job.

“I tell them to watch the Phillies or Padres games, and that’s what we are looking for,” he said. “We are not looking for a mascot who just sits there. We’re looking for the [Phillie] Phanatic or the San Diego Chicken.”

While some may view the role of a mascot as being silly and energizing the crowd, others see it as a way of opening doors for the future.

Franco, who is hoping to attend either Rutgers University or Pepperdine University in Malibu, Calif., said many colleges offer scholarships to mascots.

“College life [as a mascot] is hard — it’s crazy scheduling, but I think I’ll consider it,” she said. “I think it would be cool to say, ‘Hey, I got a scholarship for being a mascot.’ ”

Linger also would consider being a mascot in college.

“I put on the suit not even knowing they do college scholarships for this,” she said. “I was like, ‘Whoa, I can get a scholarship for something I really, really enjoy doing.’ ”

But being a mascot has its challenges.

Franco estimated the Cougar head she wears is an additional 25 pounds, and during some September football games, it felt like it was 110 degrees inside, she said. Zacharczyk said she has been punched by children attending football games, and Linger joked that she has to make sure she doesn’t step on any children as she deals with the limited vision of the Ram head.

But their schools are fortunate, as many have difficulty finding a mascot. Both Michael Walsh, athletic director for the Jackson School District, and Phil Ricci, supervisor for extracurricular activities at Manalapan High School, said they do not have students who consistently perform as mascots during football games.

Many students who do step into the role are glad they did. Franco said she will look back fondly on these days.

“I think it has been a great experience. I think, to be on the field with the football team is so cool,” she said. “It is definitely a great high school experience I will never forget.”