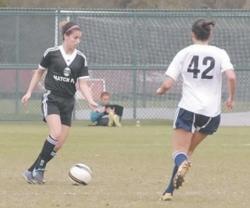 Not only did the Trojans complete a sterling 17-2-2 season in 2013, but they captured the state championship in the highly competitive NJSIAA Non-Public Group A. Other than repeat as state champions, what can Bishop Ahr do for an encore, and what will Scarmozzino’s role be as one of the team leaders?

Her answer reveals why the Metuchen native was designated a captain as a junior by coaches Jim Tavormina and Ernie Penny and why she will be an important part of Bishop Ahr’s success during her tenure — not only on the field, but how she comes across to the new members of the team.

“My personal goal [as one of our captains] is to help incoming freshmen and underclassmen feel welcome and comfortable within the fabric of the team,” Scarmozzino said. “I had the opportunity to play with some of the great leaders in the past like Dana Peterson, and I learned how leadership can positively impact a team’s success. I look forward to whatever I can contribute. I can tell you we want to be as good as we were last year, repeat as [Greater Middlesex Conference (GMC)] White Division champions and, of course, win the state title again.”

One piece of hardware that’s missing from the 2013 trophy cabinet goes to the winner of the GMC tournament title, and winning that championship is another team goal, Scarmozzino said.

With the complement of experience that Bishop Ahr returns, there is every reason to expect the Trojans can get the job done. The leading scorer, junior Jill Vassallo (22 goals), is back, along with seniors Cali Clarke, Claire Dundon, Sarah Harmon, Dana DeSantis, Isabel Vasquez and Rose Demirjian. Then there is Scarmozzino.

Her four goals and seven assists were not among the Trojans’ leading scorers, but her on-field contributions were just as crucial during the season, as was an impressive stretch of postseason one-and-done games, including 1-0 victories over such teams as Holy Cross High School in the semifinals and Immaculate Heart Academy in the championship game.

“Lindsey is the perfect player to play attacking center midfield, which is her position because of her skill set,” Penny said. “She is great with her feet, sees the entire pitch and can play a physical or finesse game.” Penny said that Scarmozzino was at her best when she took ownership of the ball on her side of the field and then moved forward with a burst of speed, seeking out teammates for open shots.

“One of Lindsey’s most valuable attributes is how unselfish she is when it comes to distributing the ball,” Penny said. “She’s always looking to pass first before shooting. She sets up our forwards extremely well because the defense is kept guessing.”

She is the second Scarmozzino to attend Bishop Ahr. Her older sister, Dani, graduated in 2009, and her experience helped introduce Scarmozzino to the parochial school. When the multi-talented student-athlete arrived as a freshman, she was dividing her time between basketball, gymnastics and soccer.

“Gymnastics and soccer are both fall sports, so I made the difficult decision to play soccer,” she said. “I played basketball through my sophomore year. But since I want to play soccer in college, I decided to concentrate on that sport.”

While Scarmozzino has not committed to a particular college upon graduation, she has chosen to pursue a major once she makes a decision.

“My long-term goal is to study athletic training and eventually earn a Ph.D. in physical training,” she said. “Rowan University, Marist College, Quinnipiac University and the University of North Carolina-Wilmington are among the schools I’m interested in.”

Scarmozzino credits her parents, Mark and Dolores, for having the most positive impact on her life.

“I’m definitely my daddy’s girl,” she said. “He’s been to all my games, regardless of the sport, since I was little and has always been there for me. My coaches have also impacted my athletic life in so many ways.”

One of the most beneficial aspects of playing for Tavormina and Penny has been how the coaches helped their players maintain their commitment to academics. Scarmozzino has capitalized on that culture by developing a fine-tuned skill for managing her time and balancing the difficult task of playing sports and completing studies.

“I’m really proud of what I have been able to achieve with my grades,” she said. “ made the Principal’s List last year, and I’m working to achieve that again this year.”

Scarmozzino has worked hard to become an important member of her team, but she said an added motivation was her keen desire to contribute to the Bishop Ahr soccer legacy. “The varsity [here] is made up of a really special group of girls, and I can honestly say I wouldn’t be half the person I am without being around them,” Scarmozzino said. “There’s a saying that we have ‘each other’s backs,’ and that is true, whether we’re in school or on the field. We know we’ll be friends for life.”