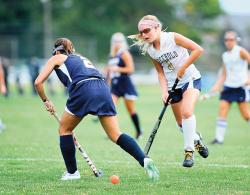 With Freehold moving up to the Shore Conference A North Division in 2014, the regular season meetings between the clubs will be meaningful because they will go a long way toward deciding which team is the division champion.

Freehold Township has dominated A North, winning the last four years, while the Colonials have all but owned B North. Now the two are playing for the same title.

Freehold lost a lot to graduation, but what will be missed the most is their four senior cocaptains: Haley Meade, Lauren Bock, Alexis Arancio and Katie Luchino, who were pivotal to Freehold’s success during their four years.

“Our incoming upperclassmen are mature and ready to take on the responsibility of leading the team,” coach Kelly Craig said.

Freehold had a number of freshmen contribute last year, and they are back to make a bigger contribution. In addition to Bock and Tiefenthaler, Gabriella Arancio (forward) and Jillian Ruggiero (defense) will be mainstays this year.

Despite the losses to graduation, the Colonials are returning a lot of experience. That includes the presence of seniors Emily Kaplan (defense), Erin McBurnie (goalie) and Lupe Perez; junior Faith Orsetti (goalie); and sophomores Danielle Brodsky, Lindsay Koller and Alisa Lytvyn.

The Colonials again have a number of freshmen who could contribute this year. They are Julianna Calogero, Alyssa Correia, Nicole Fossani, Crystal Harris, Nicole Ray, Isabella Reynoso and Katie Ricker.

Freehold will again be built around its defense and strong midfield play. Up front, it will look to get contributions across the board.

Never a team to rest on its laurels, Craig said the Colonials work on being better than they were the year before.

“We are working toward being faster and more accurate than last year,” the coach said.

Craig added that the Colonials always expect to be in the title hunt.

The Patriots are seeking their fifth straight A North title in 2014.

Coach Kim Gardner, who led the Patriots to a fourth straight division title and the Central Jersey Group IV finals in her first year, said that Freehold Township’s expectations remain the same. The Patriots expect to be competitive in the division and throughout the Shore.

“We always strive to compete with the top teams in the Shore Conference,” she said.

For the Patriots to take aim at a fifth straight A North title and achieve their goals, Gardner said they have to “continue to develop a positive work ethic and develop our skills” to keep getting better.

Freehold Township’s strength starts in the backfield on defense, where four-year starter Makayla Pak, one of the best defenders in the conference, is in charge. Joining her in the backfield is another returning starter, Marie Pietracatella, who is a solid defender.

Veteran Megan Callahan will be in goal.

The Patriots will look to Sara O’Malley and Sam Vega to control midfield play. Newcomers Sandy Conover and Raegen Dunn will help out here.

On the attack, the Patriots have returnees Jess Pietracaella, Stefanie Blair, Shannon Cestero, Klaudia Sliwa and Kayla Geller. The Patriots hope to present a balanced attack with contributions from everyone up front.

The key newcomers for Freehold Township are Jessica Applegate (attack) and Kali Williams (utility). They are freshmen.

At Howell High School, head coach Elissa Connell hopes that experience will make the Rebels competitive in A North and give the team a shot at the postseason.

Junior attacker Alex Megles is new to the team this season, and Connell hopes she can provide some offensive punch.

“The key to our success is to continue to communicate on the field, play together and execute when we have scoring opportunities,” she said.