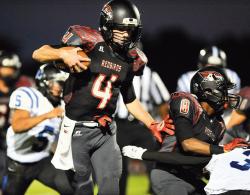 Allentown High School quarterback Michael Curry breaks off a run through West Windsor- Plainsboro High School North’s defense during their game on Sept. 19 in Allentown. The Redbirds won, 35-13, and improved their record to 2-0. ALLENTOWN

A llentown High School’s field hockey team is heading toward another memorable season with a 5-0 start coming into this week.

It’s no surprise to coach Mary Ellen Mc- Carthy, who has eight seniors, most of whom were starters on the Redbirds’ team that won the NJSIAA Central Jersey Group III championship last year and the Colonial Valley Conference Patriot Division title the last three.

“We have to put more balls in the cage this season,” McCarthy said, as only four players graduated off last fall’s team. “That’s the focus this year. We need to score more than last year, when, in most games, we put in one or two goals. We want to continue our success and score more goals.”

Allentown carries the No. 16 ranking in the state into this week’s action.

Not only is Allentown scoring more goals, but more players are contributing. Senior Maura McNutt is controlling things again at center midfield and continues her hot scoring from a year ago with a teambest six goals. Junior forward Kayla Peterson follows with five.

Against Steinert, McNutt and Pozza each scored twice, while junior Hope Narozniak rotated into the lineup for a goal and two assists.

“The last couple of games, we’ve really mixed our scoring, which is good,” Mc- Carthy said. “No one person can be keyed on. Everyone is working together as a team.

While the offense has become proficient, the defense remains a reliable constant in front of senior goalkeeper Emma Timmons, who has stepped in for graduated four-year fixture Hayley Peterson.

“She’s my lacrosse goalkeeper,” Mc- Carthy said of Timmons. “I said to her, ‘You’re a hard worker. You do whatever is asked. Can you step in? It’s only your desire and my teaching you what I know.’ The key to her was her willingness to learn.”

The backups are junior Haley Ramsey and freshman Katie White, who is also the junior varsity goalkeeper.

Helping McNutt keep things under control at midfield are senior Noelle Winston and a group of eager underclassmen.

Although many players are concluding their Allentown field hockey careers this season, there were a larger number of tryouts than usual at 60. All of them stayed in the program, including on the unbeaten junior varsity team under new assistant coach Caitlin Conk and the freshman team under coach Tess Kozlowski. Conk, an Allentown alumna who played in 2004 and 2005, was on the school’s team of the decade for 2000-09 before embarking on a fine career at Lafayette College.

McCarthy noted their teams won’t play each other. “She needs to have her own room to coach that program,” McCarthy said. “She’s trying to build that team.”

That’s what McCarthy did at Allentown many years ago, as it ascended into perennial statewide recognition.

Allentown’s football team is off to a 2-0 start after rallying back twice to beat West Windsor-Plainsboro High School North, 35- 13. It travels to Nottingham for a West Jersey Football League Colonial Division game at noon on Sept. 27.

The Redbirds opened the season by shutting out Notre Dame High School, 30-0.

Jake Alessi rushed for 124 yards on 15 carries, and quarterback Michael Curry rushed for 119 yards on 14 carries and passed for two touchdowns against West Windsor-Plainsboro North. Jordan Winston chipped in 94 rushing yards on 14 carries, while Dean Apostolico ran for another 67 yards, as the Redbirds racked up 413 yards on the ground. Coach Jay Graber credited that production to the line play of tackles Taylor Campbell and Ian Grant, guards Dan Whalen and Joe Pritchard and center Matt Schreck. Sam Beckett and Brian Hugh also rotated into the lineup, and Graber also praised the blocking of tight ends Ricky Mottram and Kevin Locke and back Matt Hahn.

West Windsor-Plainsboro North struck first against Allentown with a 27-yard touchdown run off a long opening drive. Curry then ran 9 yards for an Allentown score. West Windsor-Plainsboro North again went ahead, 13-7, off a 12-yard scoring run, before Mottram reached the end zone on a pass play that covered 16 yards just before the half. Matt DeRisi’s kick made it 14-13. That’s how it stayed until Apostolico ran 46 yards for a score at the end of the third quarter. Alessi’s 7-yard touchdown run and Locke’s 26-yard reception in the final quarter closed the scoring.

Graber said the Redbirds come into this week without any significant injuries.

“Nottingham is always a tough, highlevel program with a lot of speed,” Graber said.

Nottingham (1-1) runs an I-formation and multiple defense off a 4-3 scheme. It comes off a 27-0 rout of West Windsor-Plainsboro High School South after a season-opening loss to Lenape High School, 37-6.

“It’s going to be a really tough test because they’re very fast and physical,” Graber said about playing Nottingham.

Allentown’s boys soccer team improved its record to 3-0-2 by sweeping past Nottingham, 6-1, on Sept. 19 behind Brody Zauner’s two goals and edging Lawrence, 2-1, on Sept. 16, as Alec Scarano and Kevin Primich scored. Primich, Andrew Bardwil and Matthew Skinner had the other goals against Nottingham, while Will Sjaastad had two assists. Josh Samuels was steady in goal.

The Redbirds have only one game this week. They were scheduled to host Hightstown on Sept. 23 before returning to action on Sept. 30 against Notre Dame.

Veronica Gotilla had the hat trick and Morgan Gravatt scored twice when Allentown’s girls soccer team routed Nottingham, 8-2, on Sept. 19 for its second straight victory. It is 4-1 coming into this week.

Hartshorn scored twice in a 3-1 victory over Lawrence on Sept. 16. Nikke DeSalvatore had the other goal.

The Redbirds were scheduled to play only one game this week at home against Hightstown on Sept. 23 before hitting the road to take on Notre Dame on Sept. 30.