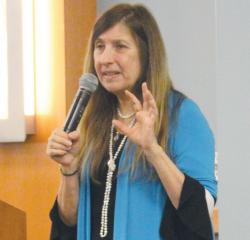 Ann Weiss, far right, discusses the cache of photos she secured after she visited the Auschwitz-Birkenau concentration camp in 1986. She has sought to identify the people in the photos, which she believes were hidden by prisoners during the Holocaust. Ann Weiss was not, by her own admission, anyone special when she stumbled upon a rare cache of family photographs confiscated from Jewish prisoners by the Nazis at the notorious Auschwitz- Birkenau concentration camp in 1943.

Weiss was neither the leader of a prominent Jewish organization nor a foreign dignitary, but by mere chance, she was granted unprecedented access to 2,400 photos that had somehow survived where so many had not.

“Millions of photos carried by millions of people … were destroyed,” Weiss told the audience at a Feb. 10 screening of her documentary, “Eyes from the Ashes,” hosted by the Center for Holocaust, Human Rights and Genocide Education at Brookdale Community College. 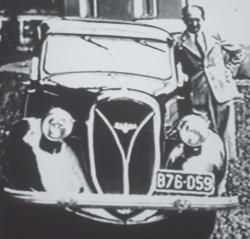 “That’s why what I’m going to show you tonight is a bit of a miracle, because one time the photos of one transport were hidden and saved.”

The daughter of Holocaust survivors, Weiss had been invited to tour a number of concentration camps in Europe as part of a private group in 1986.

Overwhelmed by the sight of the vast amount of shoes of those who died at the camp, Weiss lost track of the group and her tour guide. She frantically searched the deserted concentration camp, only to find an employee who beckoned to her, unlocking a door, behind which the collection of photos was kept.

“I was pushed out very quickly, but not quick enough to not see some [of the photos],” Weiss said. “Once you see something, you don’t unsee it. Once you know it, you don’t unknow it.” 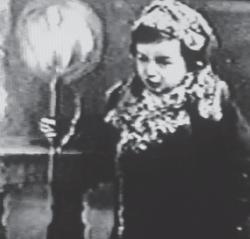 Weiss became preoccupied with the photos and ultimately spent the last of her savings to return to Poland to negotiate with the Communist government for the release of the pictures.

After a long and arduous road, the government agreed to release the photos to Weiss. “When something is important, you just figure out what to do,” Weiss said. “Looking back, it was a pretty crazy idea.”

Nearly 30 years later, just after the 70th anniversary of the Soviet First Ukrainian Front’s liberation of Auschwitz-Birkenau on Jan. 27, 1945, Weiss presented a portion of the collection to the somber crowd gathered in the college’s Warner Student Life Center. The pictures are typical family photos — some are of warm moments and candid shots, while others are pictures of groups posing at reunions or gatherings. In nearly every photo, the subjects are happy and appear hopeful for a bright future, which they would be denied by the Nazi campaign to exterminate Jews. 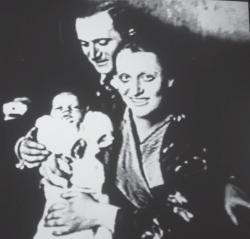 Weiss believes the photos survived because they were hidden by prisoners. She guessed that they were placed under a layer of photos of Nazi officials and soldiers.

Weiss has thus far been able to identify the people in 750 of the 2,400 photos. By painstakingly reaching out to survivors, and through extensive interviews and research, she continues to try to put a name to each face.

So often, Weiss said, the Holocaust is remembered with a focus on the perpetrators of an indescribable evil.

But the photos have the ability to shift the focus to the lives and families of those who were forced from their homes with little more than a picture and some memories.

“We’re not going to focus on [the evil] tonight,” Weiss said. “To me, the way to honor both those who survived and those who didn’t is to remember their lives in context — not only their deaths, which should never have happened.”

Milan Schwartz, an Ocean Township resident who survived a brief imprisonment in the Bergen-Belsen concentration camp as a baby, said the photos are a wonderful way to reclaim the identities of the victims instead of seeing them as statistics.

“It’s important to try to preserve and humanize the aspect of the Holocaust,” said Schwartz, whose father was killed during a death march out of Bergen-Belsen. “Whenever people talk about Auschwitz, they talk about how 1.5 million souls perished, but this is an attempt to bring some humanity to that.

“It’s important to put a face on the victims.”

For Weiss, identifying the photos remains a lifelong dedication, which she shares at thelastalbum.org.

What makes the struggle worth it, Weiss said, is the expressions of thanks from survivors, like the reaction of a man when she presented him with several photos of his long-deceased family members.

“You have released my tears,” Weiss remembered him telling her when she laid the photos out in front of him. “I can finally show my family who I am. Now, I can die a rich man.”