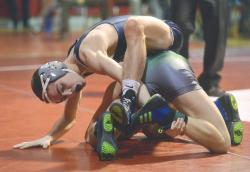 Howell High School’s Kyle Slendorn, top, won one of the most anticipated matches of the season when he defeated Colts Neck High School’s Joey King in their NJSIAA District 21 106-pound final. Both freshman wrestlers entered the match undefeated. SCOTT FRIEDMAN As has been the case for the last 10 years, the wrestling season was Howell High School’s exclusive domain.

Head coach John Gagliano’s Rebels won their unprecedented 10th consecutive Shore Conference A North Division championship. Their home win over eventual Group III state champion Phillipsburg High School was one of the highlights of a 26-2 season that saw them reach the NJSIAA South Jersey Group V finals, where they were beaten by the state’s No. 2-ranked team, Brick Memorial High School, which went on to win the group championship. Howell finished the season ranked No. 10 in the state.

The bad news for Rebels’ opponents is the youth of this team. Kyle Slendorn (106 pounds), Anthony Gagliano (132), Kris Lindemann (138) and Eric Keosseian — the four Rebels who qualified for the state championships in Atlantic City — will all return.

Not all of the accolades in 2014-15 went to the Rebels. Manalapan High School senior Jake Kaminsky (152) was the district’s top wrestler. He was the lone medal winner at Atlantic City (seventh place). He went through the regular season and NJSIAA District 21 tournament without losing a match. He finished 34-3, not losing his first match until the Region 6 finals.

Two freshmen made their presences felt: Slendorn and Colts Neck High School’s Joey King, who both wrestled at 106 pounds. They went through their respective regular seasons undefeated and carried spotless records to the District 21 finals won by Slendorn.

Slendorn had Howell’s best freshman debut since four-time state place-winner Zac Cunliffe. He won his first 34 matches, which included the District 21 championship, where he handed King his first loss of the season. He lost his first match in the Region 6 semifinals and came back to take third and qualify for Atlantic City, where he reached the second round of the wrestlebacks and completed the season with a 37-3 record.

His head-to-head win over King earned him the All-District First Team nod, as King finished second in Region 6.

The Region 6 tournament decided the 113-pound weight class. After three years of trying, Freehold High School’s Colin Monahan finally made it to the top of the podium at the District 21 championships. He beat top-seeded Sisolak in overtime, 3-1, to achieve his goal.

But Sisolak, who won many critical matches for Howell during the regular season, got a rematch in the Region 6 quarterfinals, where his win and subsequent fourth-place finish gave the senior the edge. He went 26-8.

All was not lost for Monahan at the region. He collected his 100th career victory.

Dee was one of the important cogs for the Rebels. He finished third in District 21 and won some key matches for Howell during the regular season and postseason tournament. The junior won 27 matches.

Ciacca is another talented Howell junior. He came into his own this year, winning 27 times and reaching the District 21 finals, where four-time champion Mike Russo of Jackson Liberty High School stopped him. He went 24-9.

Gagliano followed in the footsteps of his father, head coach John Gagliano, by capturing his first District 21 championship this winter. The junior went on to place second at Region 6 from the fourth seed and reached the third round of the wrestlebacks in Atlantic City. He went 33-8.

Lindemann made his case in the postseason. He was seeded fourth in District 21 and Region 6 but finished third in both, earning another trip to Atlantic City. A state place-winner in 2014, Lindemann, another of Howell’s vaunted junior class, went 28-11.

The heart of the Manalapan lineup was at middle weight, starting with Santomarco at 145. The senior captured his100th career victory during the season and won the District 21 championship.

Kaminsky’s year was simply outstanding. An early season injury prevented him from piling up more wins. He went 24-0 during the regular season for Manalapan and swept through the District 21 tournament, defeating Marlboro High School’s three-time district place-winner Dan Saraiva in the finals.

Kaminsky marched to the Region 6 finals, where Southern Regional High School’s Matt Wilhelm, who finished third in the state, handed him his first loss. However, the second-place finish earned the senior his first trip to Atlantic City, where he made the most of it by finishing seventh. He’ll continue his wrestling career at Hofstra University.

It was a good year for the Gagliano family as Nino, Anthony’s cousin, joined him as a District 21 champion. Nino, a senior, reached the wrestleback semifinals in the region and posted a 24-4 record for the season.

Chandler completed Manalapan’s trio of standouts. He was a runner-up in District 21 and reached the wrestleback semifinals in Region 6. He went 22-6 on the year.

While the lower and middle weights were Howell’s strength, the Rebels were pretty solid up top, too, starting with Silverstein.

Silverstein, a senior, finished second in the district and advanced to the wrestleback semifinals in Region 6. He went 23-14.

It’s not easy for sophomores to excel in the upper weights, but that’s what Keosseian did for Howell this year. Besides being dependable during the regular season, he was second in the district and third in the region. He was 27-11 overall.

Womack was the star of the District 21 tournament. The Cougars’ senior proved that everyone starts 0-0 in the tournament. From the seventh seed, he reached the finals and pinned the top seed, Alex Shtindler of Marlboro, to win it. After winning every match by pinfall, he was voted the tournament’s Most Outstanding Wrestler. He went on to medal in the region, finishing fourth. He was 28-11 on the season.

Demian assured his place in Howell lore with his dramatic pin in the sectional semifinals against Southern Regional. He took to the mat with his team down five, 24-19, needing to pin his opponent in order for Howell to win. It took him until just nine seconds were left in the match to do it, but he got the pin and Howell advanced with the 25-24 win.

Besides his contributions during the dual-meet season, Demian was the District 21 runner-up and went 22-9 on the season.