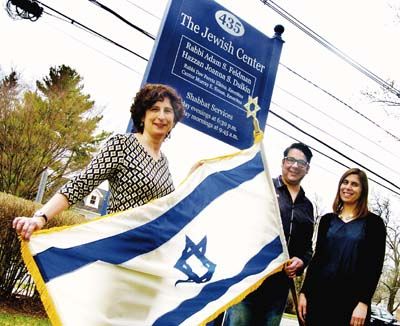 For as long as anyone can remember, members of the Jewish Center, the synagogue on Nassau Street, have celebrated Israel Independence Day with some kind of an event.
This year, the members of the Conservative congregation thought they would take their celebration to the streets — literally. On Sunday, they will walk through town in a short parade that will step off at 2 p.m. rain or shine from Cedar Lane, go to Prospect Avenue and then Princeton Avenue and end up at Nassau at the synagogue property.
“This is our first year in the history of our congregation that we think we’ve had a parade where the police have closed streets,” said Neil Wise, director of programming at the Jewish Center.
He said the parade would show “our pride, our support of Israel, and to come together as a Jewish Center community and walk together.” About 200 members of the congregation are expected to march, although that is organizers’ best guess since there is no official RSVP.
The parade is one part of the day’s events. Afterward, there will be food, a rock climbing wall, children’s arts and crafts and music during a festival that ends at 5 p.m. Joanna Dulkin, the synagogue’s cantor, will sing with a band from Israel.
But parade goers expecting to see smiling politicians and marching bands will find neither on Sunday. Mayor Liz Lempert, who is Jewish, said this week that she would try to attend but was not originally planning to be there due to a schedule conflict. Organizers are billing the event as a non-political celebration of Israeli independence.
“This is meant to be a feel-good, community pride event,” said Jeanette Timmons, who sits on the board of directors of the synagogue. “It’s not political.”
Mr. Wise called it a “feel-good day to celebrate Israel, the only democracy in the Middle East. Why not celebrate it?”
Yom Ha’atzmaut, as it is called in Hebrew, marks the anniversary of when the Jewish state came into existence on May 14, 1948. The day differs on the Hebrew calendar, so the actual anniversary varies year to year and is celebrated on a day not to conflict with the Sabbath. This year, it falls on April 23.
Mr. Wise said there are dozens of Israeli families living in the Princeton area. “And so we’re really hoping they come out” Sunday, he said.