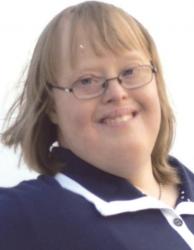 Ann Marie (Fasano) Kaltschmid died June 20, 2015, at her home in North Brunswick with her family by her side. She was 68.

Born in New Brunswick, she lived in North Brunswick for over 43 years.

She was a human resource manager for Greater Media New Jersey in Somerset for over 20 years. Mrs. Kaltschmid was past president of the board of trustees of the North Brunswick Public Library.

Funeral services will be held at 10:15 a.m. June 26 at Selover Funeral Home, 555 Georges Road, North Brunswick, followed by an 11 a.m. Mass at Our Lady of Peace Roman Catholic Church, North Brunswick. Burial will follow in Franklin Memorial Park, North Brunswick. Friends and relatives may call at the funeral home from 2-4 p.m. and 7-9 p.m. June 25.

In lieu of flowers, memorial contributions may be made to St. Jude’s Place in Memphis, Tennessee.

“Let me win, but if I cannot win, let me be brave in the attempt.”

This Special Olympics oath defines the essence of Corinne Hanko, a Special Olympics athlete and earthly angel who was called by God on June 6, 2015, to be with Him in His heavenly home following a courageous battle with leukemia.

Born in Edison, Corinne was a resident of South River for the past 36 years. She graduated from Bridgewater-Raritan Regional High School and the John F. Kennedy Vocational Program. She was employed at ShopRite in Edison and then at Bayshore Community Hospital/Pleasant Valley Adult Day Care Center, Holmdel, for 9 years as a cafeteria and recreation aide. When this program closed, Corinne then worked at Special Olympics New Jersey until she became ill.

“You have touched me and I have grown” is what those who met Corinne will say when they remember her interactions. A contagious smile, a sincere hug and a spunky personal- ity with sparking eyes were the ingredients that she possessed. Her fellow athletes, co-workers and medical team all attest to her magnetic personality. She did not permit her disability to interfere with her commitment to enjoy life to its fullest. Corinne was a beautiful young woman who was able to demonstrate courage; experience joy; participate in sharing gifts, skills and friendship; develop sport skills; and most importantly, give back in the spirit of volunteerism.

She is predeceased by her grandparents, Andrew Hanko, and John and Eleanor Jacykiewicz. Surviving are her parents, Larry and Chris Hanko; her paternal grandmother, Irene Hanko; her beloved sister, Heather McCarron, and brother-in-law Terence; her nieces, Brigid, Margaret and Elizabeth; her nephew, Sean of University Heights, Ohio; her aunt and uncle, Joan and Jeff Onori of Middletown; her aunt and godmother, L. Hanko Rosenblad, and her uncle, Axel Rosenblad of Yulee, Florida; and many cousins.