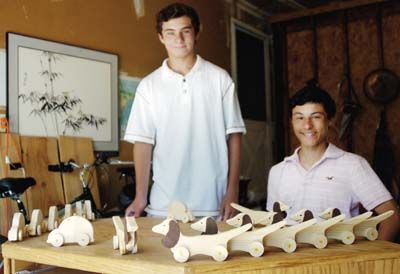 By Maddy Anand, Packet Media Group
Sam and Logan Leppo of Lawrenceville decided last year that they wanted to bring smiles to children who are less fortunate. The two rising juniors at The Hun School of Princeton and have been passionate about woodworking since they were children.
“You could say it all started 11 years ago with our grandpa,” Logan explained. Their great-great-grandfather was a carpenter and their grandfather had picked up the craft from him and passed it along to Logan and Sam. When they were five years old, he had taught them the different stages of woodworking while he was building furniture. This included measuring, cutting, gluing, clamping, sanding, staining and finishing each piece.
When they were young they would build small pieces with their grandfather such as keepsake boxes, but as children they were interested in making things they learned about in mythological stories such as wooden swords, shields, and tridents. At the age of seven, Logan even made a ballista, a Greek siege weapon, from wood he found in his yard. As they got older, their grandfather allowed them to use more advanced tools such as saws and mechanical equipment.
“Our grandpa’s furniture is really special because he builds it without using nails or screws,” Logan said. He uses glue and dowels instead and had showed the boys how to use old-style clamps effectively.
“What better way to put our passion to good use than help children,“ Logan said about the natural integration of their goals.
Their non-profit, Logan and Sam’s Workshop LLC, creates wooden toys to distribute to the children affiliated with HomeFront of Lawrence every year at the event they call Christmas in July. The event will be taking place at the Marie H. Katzenbach School for the deaf at 320 Sullivan Way in Ewing Township on July 8 at 4p.m.
“Everything has to start somewhere so we thought we would start close to home and focus on HomeFront of Mercer County,” Logan said. The teens said they were familiar with the organization and the work HomeFront does locally, so it was the natural choice. HomeFront’s mission is to end homelessness in Mercer County, N.J. They not only provide the necessities of shelter, food and clothing to the homeless, but also emergency funds, employment skills training and one-on-one help with job searching and interviews to families at risk of becoming homeless.
Logan and Sam are planning to have 50 toys by this year’s Christmas in July.
“They can take anywhere from five to 10 hours to build,“ Logan said. “Besides the measuring and cutting there is also a large amount of sanding that needs to be done.“
In order to be sure that there is no chance of splinters, the Leppos spend a lot of time sanding.
The toys they build for the HomeFront of Lawrence include only glue and dowels in the same fashion as their grandfather, avoiding nails and screws.
They build wooden cars for the boys and puppy dogs for the girls.
“Our goal is to eventually make a wooden toy for every homeless child in the United States,“ Logan said. “We understand we can’t do it alone so we have been trying to establish partnerships with schools and corporations.” They also said they hope to help raise funds for other homeless organizations similar to HomeFront.
When they’re not building toys for the homeless, Logan enjoys being the goalie for his school and club soccer teams, playing hockey for his school team, writing books, fishing and science. Sam enjoys playing soccer and fencing for his school, writing books, screenplays and guides on a variety of topics, English, and serving on the Hun Discipline committee. They both also enjoy reading, history and sailing.
More information about Logan and Sam’s Workshop is available at http://www.loganandsam.org. They are also looking for other high school or technical school students to assist in building toys for the homeless. They can be contacted at info@loganandsam.org for information on how to help.