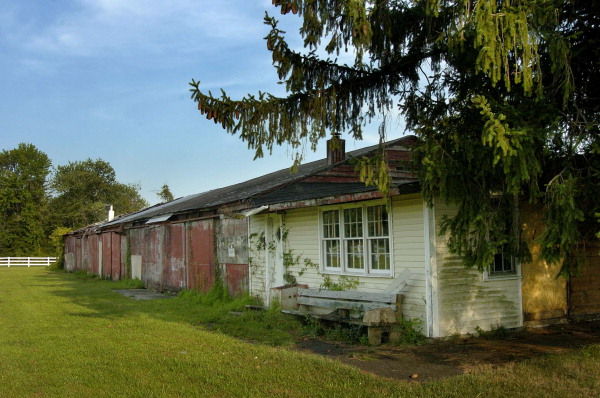 By Frank Mustac, Special Writer
HOPEWELL TOWNSHIP — Some of the last evidence that the Twin Pines Airport, used by famed aviator Charles Lindbergh, ever existed is being torn down.
Plans have long been in the works to raze an old aircraft hangar at the site off Pennington-Lawrenceville Road, near Federal City Road in eastern Hopewell Township, near the Lawrence border.
“I believe it’s underway if not completed already,” Paul Pogorzelski, Hopewell Township’s administrator and engineer, said Tuesday about the demolition.
An airstrip and hangar operated on the Twin Pines Airport property from 1945 to 2008 when the airport owners — the Weasners — sold the land to Mercer County and the municipalities of Lawrence and Hopewell townships and Pennington and Hopewell boroughs.
The roughly 50-acre former airport site is now “recreational open space,” as Mr. Pogorzelski describes it, with an artificial turf athletic field installed by Hopewell Township and several natural turf fields Lawrence Township put in.
Hopewell Township recently acquired two remaining parcels where the hangar stood as part of the original purchase contract with the airport owners. However, environmental cleanup work had to be completed first before the township would buy the land.
“Once they completed that, we received all the necessary signoffs, then we went and purchased it,” said Mr. Pogorzelski, who described the hangar as a nuisance ready to collapse on its own that, unfortunately, attracted kids.
“It’s more efficient to demolish it than to fence it in and just let it rot there,” he said. “There is a master plan to construct, on the Hopewell Township side, some additional fields.”
Open space funds from Hopewell Township and grant money from Mercer At Play were used to tear down the hangar. Mercer at Play is a matching-grant program that encourages municipalities rehabilitate or create athletic fields or facilities. 