Sherry Prioli watches as her sons Joe, 12, and Nick, 10, play a numbers game at the Howell Public Library. The eight Prioli children have been home schooled. STAFF PHOTOGRAPHER ERIC SUCAR As summer draws to a close, many families turn their attention to the upcoming school year. Shopping for school supplies and clothes, anticipating new teachers and reconnecting with friends are all part of the back-to-school routine — for most students. For a small number of students, going back to school takes on a different meaning. Those students are educated at home, usually by their parents.

“Most reasons for home schooling have not changed over the last 30 years,” said Brian Ray, Ph.D., founder and president of the National Home Education Research Institute (NHERI). The desire for more family time, the ability to guide the social life and values of their children, and the need to provide a safe environment, Ray said, still draw parents to the alternative to traditional school settings. 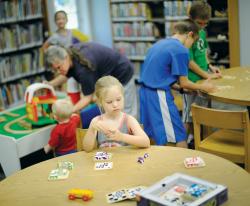 Elizabeth Prioli, 6, a home-schooled student, plays a game at the Howell Public Library on Aug. 21. STAFF PHOTOGRAPHER ERIC SUCAR “Home schooling works different for each family. Its flexibility and ability to suit individual needs is part of what makes it so appealing to me. It allows the family to get closer together. The parents really know what is going on with their children, including their interests and struggles,” said Sherry Prioli, coordinator of Catholic Home Educators Linked for Fun (CHELF), a Howell-based group of approximately 30 home-schooled families. Prioli has eight children, ages 21 to 1, and has been a home educator for 17 years.

Prioli pointed out the “flexibility” that home education offers her family.

“If the kids are into a particular subject, there is no reason to arbitrarily stop them to switch subjects. Likewise, if they really are not getting something at the moment, you can change gears and come back to the challenged topic later. Seeing your children getting excited about something is very rewarding, as is helping them overcome difficulties,” Prioli said. Peggy Barranca, leader of about 200 families in the Home Education Group (HEG) of Calvary Chapel of Old Bridge, said home schooling allowed her to “hand pick” the education for her four children.

“I was able to direct our own standard and make adjustments along the way,” Barranca said.

Jenn Maher of Jackson, who does not belong to an educational coop, has been home-schooling her eight children for 12 years and points to being “intimately involved” in their education at home.

“All of my children learn differently, and I have had the pleasure of learning how to meet each of them where they are. I especially love when I see the ‘light bulb’ go off in their head, when I know that they have gotten it and it was me who helped pave the way to that new discovery,” Maher said.

According to the U.S. Department of Education, National Center for Education Statistics, approximately 3 percent of the school-age population was homeschooled in the 2011-12 school year. Some organizations, such as the NHERI, put the number a little higher than 3 percent and estimate that 3.5 to 4 percent of the schoolage population is home-schooled.

One possible reason for the discrepancy is the lack of information that is gathered about the home-schooled population in some states, including New Jersey.

“We don’t collect information on the number of students homeschooled,” said Rich Vespucci, a spokesman for the New Jersey Department of Education (DOE).

The local board of education is not required or authorized to monitor the outcomes of the child.

Although the New Jersey DOE recommends that parents notify their local school district if they are home schooling, a parent is not required to do so, Vespucci said.

“It is no different than not telling the local school district about a child going to Catholic school or private school,” Ray said.

When a parent or guardian educates a child elsewhere than at school, he is responsible for the educational outcomes of the child, the New Jersey DOE website states.

Although New Jersey does not keep records on home schooling, other states where home education is more popular do, such as North Carolina and Florida.

“Where states do keep data, there is growth,” Ray said.

Home schooling is more popular in the South and in the West than in the Northeast.

“Generally, the South is still the Bible belt, and Christians still lean toward it. They want to transport Christian values, not the government values,” Ray said.

In the West, Ray said, there is a more libertarian attitude of “I don’t need the government. I can do it better.”

Some families do not like the federal government’s control of schools through the Common Core curriculum and standardized tests, and this, along with the ease of Internet support, bolsters the number of students who are homeschooled.

Valerie Guerrero, of Little Silver, a teacher with a master’s degree, will start to home-school her children, ages 9 and 7, for the first time this school year.

One reason Guerrero chose home schooling was to “escape the standardized testing culture.”

Scores for home-educated students are typically above average on the SAT and ACT tests, according to Ray.

“I tend to set academic goals for the week, thus giving my children some control over what they need to accomplish and when. You are not stuck schooling from 9 a.m. to 3 p.m. You can take advantage of time available to accomplish the written work and still enjoy other activities,” Prioli said.

The other activities often involve an area that critics often point to about the disadvantage of home education: socialization.

“Many outsiders seem to think home-schoolers sit home all day. The reality is that many of us are busy taking advantage of all the wonderful opportunities around us. Whether they be classes or activities just for home-schoolers or visiting museums without crowds, the home-schoolers I know are involved in a variety of things. There are home-school dances and proms and home-school sports teams,” Prioli said.

Throughout the state, various attractions accommodate homeschoolers with special programs.

In addition, home-schoolers socialize by meeting at parks, art classes and sports teams, just to name a few.

“There was never a time when my kids were not involved in a group,” Barranca said.

One sign that home schooling has become widely recognized is at the higher education level. Many colleges now have admissions provisions for homeschooled students, according to Emma Caban, an admissions counselor at Monmouth University, West Long Branch.

“We do see a handful of students with a home-school option. Sometimes it’s better for students to learn this way,” Caban said.

Home schooling does, however, raise concerns for some people.

“In general, I believe that children who are home-schooled are at risk of being shortchanged educationally and socially. In all likelihood, well-meaning, hard-working parents who elect to home-school their children lack the specialized content knowledge and pedagogical skills of classroom teachers in public and private schools,” said Maria Soles, Ph.D., an assistant professor of mathematics at Guttman Community College, New York.

Students educated at home also miss out on the opportunity to learn from peers who have different backgrounds and opinions, Soles said.

“In school, students may have the opportunity to debate their peers in a history class or work collaboratively with their peers in a science class. Students who are home-schooled would miss out on these valuable experiences and are at risk of being more isolated socially,” Soles said.

Yet, as home education has become more socially acceptable and the public perception of public schools has worsened, home schooling will continue to grow, according to Ray.

“When the first crop of homeschooled kids have kids of their own, they will be more likely to home-school,” Ray said.

Peggy Barranca’s oldest daughter, Lynanne Rosenthal, is now a mother and will carry on this family tradition of home schooling as she made the choice to educate her children, ages 7 and 3, at home.

“I prefer to control their education quality and workload. I want to make sure they are paying attention and that they understand the material,” Rosenthal said.

Adding that she does not “trust the school system these days,” Rosenthal said she knows homeschool and non-home-school parents who feel the same way.

“I truly feel that I was set up for success, not because of how much I learned, but because I was taught how to learn,” Rosenthal said.

Are home-schooled students allowed to participate in curricular and extracurricular activities or sports activities?

A board of education may, but is not required by law to, allow a child educated elsewhere than at school to participate in curricular and extracurricular activities or sports activities.

A board of education may, but is under no obligation to, lend books or materials to a child educated elsewhere than at school.

Does a child educated at home have to take state tests?

A child educated elsewhere than at school is not required to sit for a state or district standardized test.