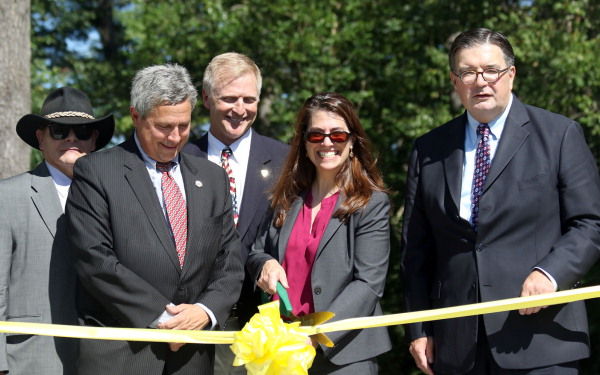 By Philip Sean Curran, Staff Writer
A 4.6-acre property that used to be a private residence was added to the Princeton Battlefield Park in a land purchase that involved government and nonprofits uniting to preserve a piece of national history.
Mayor Liz Lempert joined state and county officials and others at a ribbon-cutting ceremony Wednesday morning on the British side of the battlefield. Standing with the Greek colonnade behind her, Mayor Lempert thanked those involved in acquiring the land.
“Just this whole experience reminds me how lucky we are to live in a place like Princeton,” she said. “We have such a rich history. We have a long lineage of heroes. And I also feel lucky to be inspired by the modern-day heroes who want to honor that past and to help to make this a better community.”
The genesis behind the purchase began seven years ago when park historian John Mills informed the nonprofit Princeton Battlefield Society that properties along the northern ridge were up for sale, said Mark Texel, director of the State Park Service. Society vice president Kip Cherry contacted Joseph D’Ambrisi, a now late former Mobil Oil executive who lived in Princeton with his wife, Fran.
“It was Kip Cherry that came first, about four years ago,” said Ms. D’Ambrisi after the ceremony, joined by two of her sons, Jim and Mike.
In her remarks, Mayor Lempert singled out Ms. Cherry for thanks, at one point calling her “the woman with the vision.”
“She was going to make this work no matter what obstacle came our way,” Mayor Lempert said. “Many times when we were really unsure whether this was going to happen, it was Kip’s enthusiasm that kept the project going.”
A mix of money from the state, the county and the Friends of Princeton Open Space was used to buy the property for $850,000 from the D’Ambrisi family, which had owned it since 1985. The town contributed $100,000 to fix a dam on the property, demolish the house and remove a steel pool, said municipal engineer Robert V. Kiser after the ceremony.
Wednesday’s sunny weather stood in contrast to how conditions were in January 1777, when two armies clashed in Princeton. Forces led by General George Washington faced their British counterparts, two units of which were lined up on what later became the D’Ambrisi property, according to the Battlefield Society.
American forces won a critical victory that was seen as a turning point in the war.
According to the Society, some 36 British and American soldiers were buried in a mass grave, in an opening or a crevice in a quarry. The acquisition of the site presents new opportunities to explore what historic artifacts the ground underneath might hold.
Ms. Cherry said the Society has used ground penetrating radar to find the quarry, believed to be in the area of the D’Ambrisi property. Results of the radar have found two anomalies of interest, some 5 feet down, she said.
“But it’s kind of exciting to think that we might have found something,” she said.
Earlier in her remarks, Mayor Lempert said standing in the place where history occurred is a “totally different experience” than just reading out about it.
“It brings the battle to life and it allows you to experience and re-imagine it in a way that you just can’t do through reading it abstractly in a book,” she said. “So much of what happened here changed the course of our country’s history.”
“Now, in terms of stewardship from an environmental and a recreational standpoint, having this piece of property attached to the park enables us to create a wonderful trail system from downtown Princeton along (Route) 206. That will eventually provide a new trail access point to get into Princeton Battlefield and across Mercer Street over to the Clarke House,” Mr. Texel said.