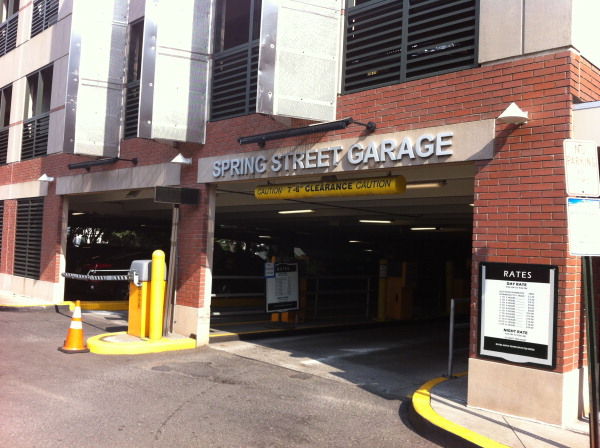 By Philip Sean Curran, Staff Writer
Patrons of the Princeton Public Library still will be able to park free for two hours at the Spring Street municipal garage, as the council on Tuesday backed away from an unpopular proposal to eliminate the freebie.
Officials tabled an ordinance that would have provided one hour of free parking in the garage for everybody at the expense of two free hours for library users. But officials heard deep opposition to that outcome from residents including former mayor Phyliss Marchand, who left watching the Mets game on TV so that she could weigh in at the council meeting.
Gerald Kaplan of Princeton was part of a group of residents speaking up for keeping things the way they are.
“I know that there’s a groundswell to support the two-hour-parking,” Councilwoman Jo S. Butler said.
Howard Silbersher recalled how in 2007, parking for two hours was revoked and limited to 30 minutes. That led to decreased attendance at and revenue for the library.
Subsequently in November 2008, the township and the borough agreed, formally, to subsidize the cost of patron parking up to two hours. Town attorney Trishka W. Cecil told officials the agreement was no longer legally binding.
The town had said it was going to make the change having understood, on one hand, that library staff did not want to have to validate parking tickets any more. Also it was being done in response to cheaters, who take advantage of the free parking without using the library.
But library director Leslie Burger said Tuesday that the library never said it did not want to validate parking tickets. Starting in May, the library had a self-validation machine as a way to get library staff away from handling that responsibility.
“I apologize if that was interpreted as the library doesn’t want to validate anymore,” Ms. Burger told council members.
The town is in the midst of installing new gates and pay stations and making other garage improvements. There will be a validating machine in the library for patrons to use and which will be “staff-mediated,” in Ms. Burger’s words.
For his part, Council President Bernard P. Miller researched the history of how patrons came to get two free hours.
“It’s interesting that a town that has as much history as Princeton, it’s often easier to go back and get history that occurred two or three hundred years ago than it is to find a trail from recent history,” Mr. Miller said.
The issue had come up amid a debate within the then two Princetons in the early 2000s about where to put the new library building. Borough residents wanted the library located downtown, while township residents wanted it in the Princeton Shopping Center.
There was a compromise, creating the free parking if the library was located downtown. During the fundraising campaign to construct the building, a brochure went out saying the borough had pledged that 85 spaces would be available in the garage for library users and that up to two hours would be validated for cardholders by the library.
“That’s the context of where we are today,” he said.
Councilman Lance Liverman recalled that as a member of township committee, library parking was a “hot topic.” He said he thought council members should stick by what they told the public then.
“The truth is that there is no free parking, someone has to pay for it,” Councilwoman Jenny Crumiller said. “So the question is, who pays for it. And in my view, people who drive to the parking garage and use the parking garage are the people who should pay for it.”
More long term, officials have said they would look at raising rates for parking, including meters, across town. They said it has been many years since rates have gone up.
“I don’t want anybody to be surprised if, in a month or two from now, we’re talking about general changes to parking fees,” Councilwoman Heather H. Howard said.