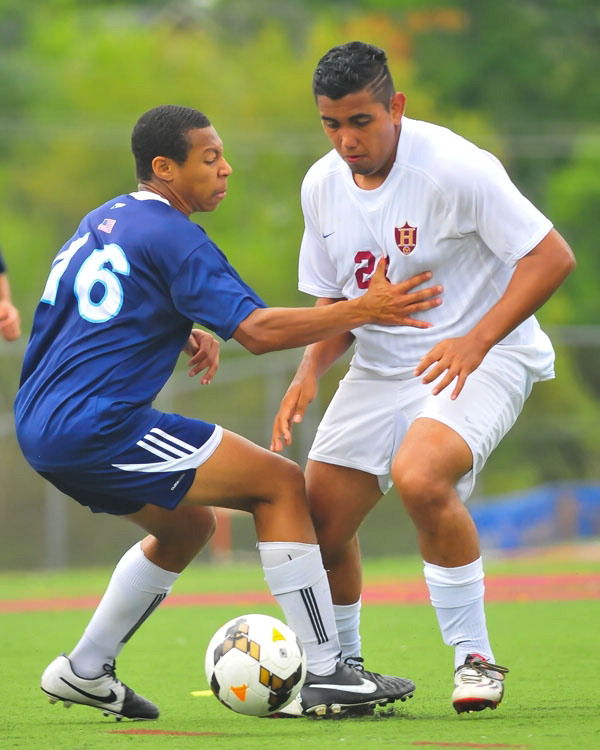 By Justin Feil, Packet Media Group
The Hillsborough High School boys soccer team had been close each and every game, but winning had been elusive.
The Raiders broke through at the perfect time as they earned their first win of the year, 3-1, over Rutgers Prep to open the Somerset County Tournament last Saturday.
“It obviously feels good,” said Hillsborough head coach Eric Puma. “We have played well in the past and just not won games. In this game, it was not our sharpest performance but we got the win. We’re trying to get a result and play well at the same time.
“For the players, it can be tough. They’re working hard and they’re not getting the results. It was nice to get the win. Hopefully there’s more to come.”
The Raiders had a goal and assist from Carter Altman, a goal from Danny Kozimbo, a goal from Eddie Michta and an assist from Andrew Patterson in the victory. Robbie Degaris made one save to keep Rutgers Prep at bay. The three goals was a season-high.
“We finished our chances,” Puma explained. “We created and finished them. We also played good team defense.
“At the beginning of the year, we weren’t creating (chances). Then we’ve been doing a better job of creating them. In the Immaculata game we had plenty of chances, but didn’t finish. We’re heading in the right direction. Now we’re creating them and finishing them.”
Hillsborough followed up its county win with a 1-0 loss to Watchung Hills. It’s just the second time this season that it has been shut out, though the Raiders also haven’t given up many goals this year despite being 1-8-1. Only once have the Raiders lost by more than one goal.
“We’re close,” Puma said. “We’re playing well, but not well enough. That’s why we’ve come up short.”
Hillsborough will honor its seniors on Senior Night before they host Ridge tonight, then turn their attention to extending their county run. They resume the SCT at seventh-seeded North Plainfield at 11 a.m.
“It’ll be a good game,” Puma said. “We’re the visitor. We’re the underdog.”
The Raiders are a dangerous underdog. They have been in every game, and with a break here or there, they would have a different record. Hillsborough will turn to its veterans to keep it in contention in the county.
“Gareth Dennis has been solid at the back with Phil Masaikowski,” Puma said. “They play center back and they’ve been consistent for us. Ed Michta and Andrew Patterson, our leading scorers, we lean on them. They’re our four captains. They’re the heart and soul of our team. They’re the guys driving the bus.”
They are trying to push the Raiders to a long run in the SCT that could give them the chance to avenge some of their earlier heartbreak. Hillsborough has been doing all it can to turn the tide, and they’re hopeful that they can duplicate their county opener efforts as they search for the keys to victory.
“We’ve been changing our formation,” Puma said. “We’ve been changing personnel to find which kids are most effective in which spots. We’re still trying to find the right combination. That’s my job. We’re headed in the right direction. Our best games have come lately.” 