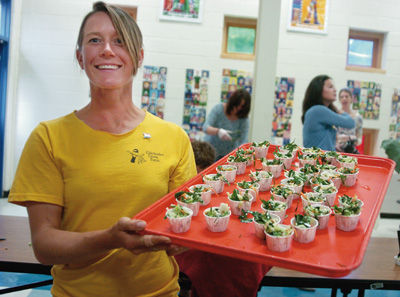 By Philip Sean Curran, Staff Writer
Second-grader Katie Sikma sat down for lunch on Tuesday with her classmates at Community Park Elementary School to find small sample-size portions of broccoli leaves waiting for them.
The samples were put there on a day when the entire student body would try them, with the leaves given to them in three different ways to test and explore the range of their palates. Scenes like the one Tuesday — of children trying something they might have not tasted before — are replayed regularly at schools around a district where having students eat healthy is a priority.
Children at the four elementary schools get a different tasting of farm produce or some kind of artisan product four times a year through a program, “Garden State on Your Plate,” run by local nonprofit group Princeton School Gardens Cooperative. Area chefs and farmers are brought into the schools to give children a food experience during their lunch period.
On Tuesday, farmer Jess Niederer, of Chickadee Creek Farm in Pennington, stood in front of the children with a potted broccoli plant and talked to them briefly before introducing Chef Dan Slobodien from Princeton University Dining Services. Her produce and his culinary skills worked in tandem.
Karla Cook, one of the four founders the cooperative and former restaurant critic for the New York Times, said students are asked to lay aside their biases about fruits and vegetables and instead approach the food as scientists. The goal is to have them explore how the taste, texture and experience of the food can be changed by adding salt, lemon juice or some other flavor.
She said the items at a given tasting are prepared in various ways, which can run the gamut from having the produce raw or even in a soup. Parents get copies of the recipes of all the tastings, work that is handled by Fran McManus, one of the other co-founders of the cooperative and administrator of the program.
“I hope it encourages them to try the vegetables, and I think from my experience last year, it has,” said Katie’s mom, Tara Sikma, who was one of the parent volunteers helping out preparing for Tuesday’s tasting. “I think when they’re all together trying something, they’re more likely to try it.”
Parents get copies of the recipes of all the tastings, work that is handled by Ms. McManus.
Joel Rosa, the food service director with Nutri-Serve Food Management, the company that runs the district’s cafeterias, said he sees a correlation between the tastings and students subsequently taking more vegetables in the days afterward.
“I think it’s important that we do these tastings so that it gives them an opportunity to try it out,” he said. “It makes trying vegetables fun.”
Some state, county and local politicians were on hand at the school. “It’s a terrific program, and it’s great to see the collaboration between different groups to help make our kids healthier and to help demystify both where we get our food from (and) and how it’s grown,” Mayor Liz Lempert said standing inside the school’s outdoor garden.
New Jersey Agriculture Secretary Douglas H. Fisher toured the cafeteria and the garden during a promotional visit touting the start of farm to school month and national school lunch week. Afterward, he said he was impressed by what he saw — of how parents, school staff and others have come together around a goal of having children eat better and learn about the foods they eat.
“When you put all that together,” he said, “it manifests itself into something that is extraordinary.”