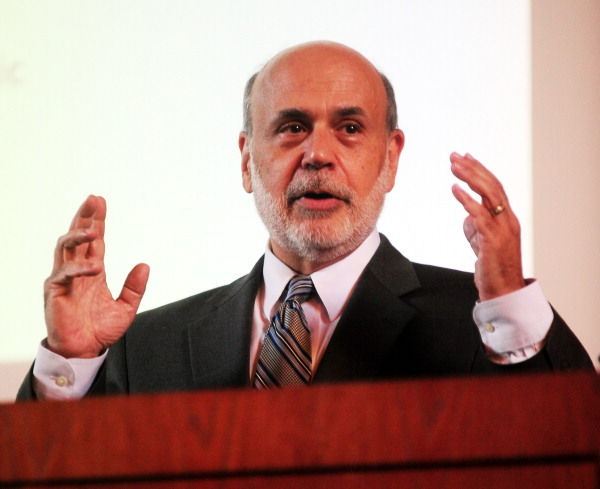 By Philip Sean Curran, Staff Writer
Former Federal Reserve Chairman Ben S. Bernanke said at Princeton University Tuesday that the Fed made the right decision to bail out insurance giant AIG during the height of the financial crisis given the global consequences its collapse would have caused.
Mr. Bernanke, Fed chairman from 2006 to 2014, said AIG was in imminent danger of failing and required large injections of money — at the time $85 billion — to prevent that outcome. The insurance company, he said, had been insuring the so-called sub-prime mortgages that banks around the world were holding.
He said that bailout was necessary because “we knew that the collapse of the firm would potentially destroy or at least paralyze the global financial system with tremendously bad consequences for everybody.”
“So even if it was a distasteful thing to do, it was something that had to be done for the benefit of our economy and our country,” said Mr. Bernanke to a campus audience in McCosh 50.
In his remarks, he did not mention that in July, a federal judge ruled that the Fed’s actions regarding AIG had been unconstitutional.
Regarding the collapse of Lehman Brothers, he said two potential buyers had been lined up to save the firm: Bank of America and Barclays, a British bank that had British regulators. He said Bank of America backed out after reviewing Lehman’s books, while the British government blocked the deal.
In looking back at the lead-up to the crisis, Mr. Bernanke pointed to a “fragmented” regulatory system in which nobody had responsibility for the entire system.
“There were a lot of gaps in the system. A lot of parts of the economy were not regulated,” he said.
He said subsequent legislation by Congress, in the form of the Dodd-Frank Act that created more federal regulatory oversight and other restrictions on financial institutions, had gone a long way in closing those gaps.
Mr. Bernanke said the economic recovery has not been “as strong as we would like” but is better in comparison to other industrialized countries.
Since leaving the Fed, Mr. Bernanke, 61, has joined the Brookings Institution and recently released his autobiography, “The Courage to Act.” He returned to familiar ground at Princeton, where he once taught and led the economics department.