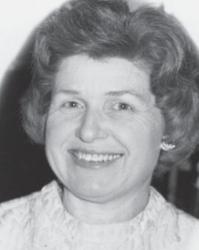 Lola Evelyn Morgan, 91, of Ellisville, Mississippi, passed away on Oct. 12 at Wesley Medical Center, Hattiesburg, Mississippi, with family by her side.

Lola was preceded in death in 1993 by her husband, George E. Morgan, a former retired executive with Consolidated Edison of New York and a former vice president of New Jersey Natural Gas.

Lola’s hard work and dedication helped her family grow and flourish from wartime days in Mobile, Alabama, to new opportunities in Indiana and then Middletown, where she resided for 27 years. She had no problem adjusting to the snow and strange new accents.

Lola enjoyed league bowling both here and in Middletown, and was a longtime member of the Laurel Iris Society (Mississippi) and the local Halcyon Club. She was a passionate gardener and loved traveling the country. She helped Dad build a house on Old Marcel Lake in the Poconos, Pennsylvania. Lola attended New Monmouth Baptist Church, Middletown, and First Baptist Church, Ellisville.

She was preceded in death by her parents, Vadie Francis and Walter H. McDonald; by her brothers, Walter Jack Mc- Donald and R. Odie Mc- Donald; by her sister and youngest sibling, Evie Rae McDonald; by her grandson, Erik Justin Morgan in 2009; and by her daughter-in-law, June Alice Briggs-Morgan of Portland, Oregon, in June 2015.

Lola is survived by her sons, Robert I. Morgan, Esq., of Brownsville, Vermont; Ronnie E. Morgan and his wife, Vivian, of Ellisville, Mississippi; George E. Morgan, Jr. of Portland, Oregon; and Walter M. Morgan of Ellisville, Mississippi; by her sisters, Margrea Watkins and Vera Leggett, both of Moselle, Mississippi; by her grandchildren, Jessica Morgan, DVM, of Newington, New Hampshire; and Candice V. Morgan of Laurel, Mississippi; and her grandson, Sean Morgan and his wife, Anna, of West Hartford, Connecticut. She leaves behind her great-grandsons: Jamie and Andrew Nowell of Newington, New Hampshire; and Max M. Morgan of West Hartford, Connecticut, leaves behind and many beloved nieces and nephews.

An online guestbook is available at http://www.ellisvillefuneralhome.com.