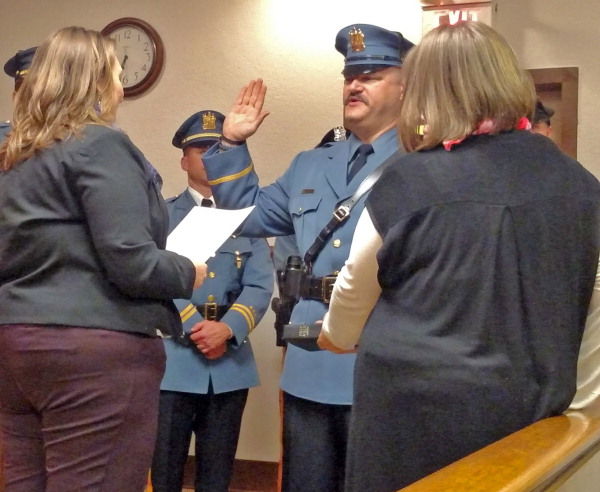 By James McEvoy, Special Writer
LAWRENCE — Family was the word frequently used during the swearing in of two police officers, as well as the promotion of another to sergeant at the Township Council meeting last week.
Mayor Cathleen Lewis, who swore in Officers James D. Gorski Jr. and Robert T. Janoski in addition to promoting veteran officer Scott W. Stein, said the support of officers’ families is essential to their service.
“You give us your family members and entrust that their co-workers will keep them safe,” Mayor Lewis told officers’ families.
She also lauded the large contingent from the Lawrence Police Department who were also on hand for the swearing in and likened them to a family.
“To see so many of your fellow officers here tonight is a testament to the force and their chief that you have become a family. It makes us a stronger town,” Mayor Lewis said.
The legacy of family was also on display as each of those sworn in come from families of police and other public servants.
Sgt. Stein, whose father is a retired Trenton police officer, graduated from Ewing High School and is also a lifetime member of the first aid squad.
“I’d like to thank my family for basically putting up with me. It’s tough work, not only for me, but for my family. I thank them for putting up with all the missed holidays, the missed birthdays,” Sgt. Stein said.
Sgt. Stein, who resides in Burlington with his wife and two children, began his career in Lawrence as a communications operator in 1997 and became an officer in 1999. He serves as an evidence technician and CPR trainer with multiple awards and letters of commendation to his name.
“I also want to thank my dad for inspiring me to be a police officer,” he added.
Officer Gorski graduated from Lawrence High School in 2007 before earning a bachelor’s degree in exercise science from Wesley College in Delaware.
Despite his degree, it seemed inevitable he would follow in the footsteps of his family of public servants including his father, James Gorski Sr., who was a longtime employee with the Department of Public Works.
In addition, his grandfather is a retired Lawrence Township police detective. Officer Gorski’s stepfather is also a sergeant with the Cranbury police and he has an uncle who has served in the Lawrence and East Windsor police departments.
Officer Gorski spoke highly of his hometown, which he has served as a volunteer firefighter since he was 14 years old.
“It’s a great place and I’m anxious to get to work,” he said.
Officer Janoski, too comes from a line of police, as his father is a retired Lawrence police officer.
Officer Janoski, who along with Officer Gorski, graduated from the Mercer County Police Academy earlier this year, said he is looking forward to doing what he loves.
“I’m strong believer that if you love what you do, then you don’t work a day in your life, so it looks like I won’t have to work for the next 30 years,” he said.
Police Chief Mark Ubry noted the family that is the Lawrence Township Police Department is expected to grow even more as three recruits are currently training in the police academy. 