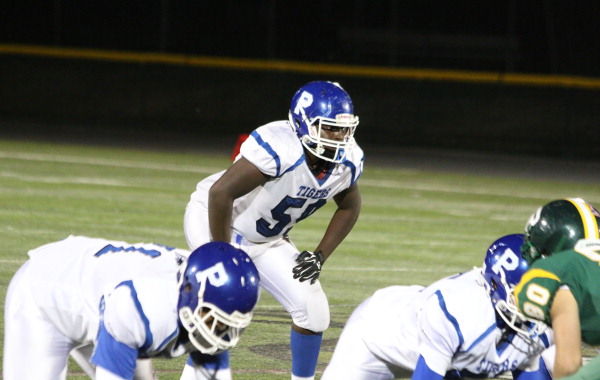 By Bob Nuse, Sports Editor
Kiki Mahiri has no problem playing wherever it is the Princeton High football team needs him.
On the offensive side of the ball, Mahiri was a center as a sophomore and moved to guard last year before settling back in as the Little Tigers’ center this year. On defense, the senior has slid nicely into his new role as a linebacker this year after previously playing on the defensive line.
Mahiri made his presence felt on both sides of the ball last Friday night as he helped Princeton a 34-7 win over West Windsor-Plainsboro South. The win snapped a two-game losing streak as Princeton improved to 3-4.
“Last year we had a lot of leaders step up and this year we had a big transition with a lot of us,” Mahiri said. “We had 15 seniors leave and we all just had to step up. Most of the seniors on the offense don’t come off the field for defense. We play 95 percent of the game. It’s all about the fourth quarter really. If we can hold our own until the fourth quarter and keep our composure then we can really step it up as a team.”
Princeton used a balanced offense and strong defense to hand the Pirates their sixth straight loss. Mahiri and the offensive line opened enough holes for Rory Helstom to rush for 96 yards and a pair of touchdowns. Moses Mahiri, the sophomore brother of Kiki, ran three times for 116 yards and a touchdown, while David Beamer completed six passes for 130 yards, including a 68-yard strike to Alex Solopenkov for a touchdown.
“I really have to take the time and do my job,” Mahiri said. “It’s been a growing experience because this is my first year as a linebacker and I am hoping to continue.
“The center position wasn’t really new because I started sophomore year because our starter got hurt that year. It’s been a lot more serious for me this year because the snap and step is something I really had to get down.”
Princeton coach Charlie Gallagher likes Mahiri’s versatility and could see during the offseason that he was a strong candidate to move into one of the open jobs at linebacker.
“We talked about it a little in the offseason,” Gallagher said. “We had Kyle (Angelucci) coming in but he was a little unproven at linebacker. We had to replace Sam Smallzman and Brian Tien, who were three-year starters for us. We didn’t have anyone except Kyle, who was first-year varsity. We needed some more stability back there so we moved Kiki him from the defensive line to linebacker.
“He went to a couple camps. He moved well as a lineman so of all of our linemen I thought he would be the best fit. He’s done a really nice job at linebacker for us. He played a little center his sophomore year. We have had him at a couple different positions and he has done a good job for us.”
For Mahiri all that really matters is helping the Little Tigers win the game. He’d like to see the team end the season strong, beginning with this week’s game against Robbinsville.
“(The South game) was a great win for all of us because it really builds not only our starters, but our backups and our younger players,” Mahiri said. “This year we had more freshmen than we have had in the last 15 years and we’re really looking to build the program from there. It starts with them. We have to set the example and then let them go from there.
“We want to end on a winning season and keep going from there. We can’t get our spirits down just because we have four losses. At the end of the day these are our last years and we have to keep going. We have been playing together since 2012, which seems like so long ago. It’s been really nice to be with everyone. Our offense and defense is mostly seniors. It’s a lot of work and a lot of fun.”
One of the highlights of the win over South for Mahiri was watching his younger brother, Moses, break loose for a 76-yard touchdown run.
“I was actually surprised,” the older brother admitted. “I looked down the field and I thought it was Rory, our normal running back. And then Rory tapped me on the back and said, ‘That’s your brother.’ It was a great run. He smelled the touchdown. We always say on offense you have to smell the touchdown and really want it.”
Princeton built a 34-0 lead thanks to the four touchdowns on offense and a blocked punt by Winston Peloso that he scooped up and ran 2 yards into the end zone for a touchdown. The Pirates picked up a touchdown in the closing minute when Zyion Cooper, who rushed for 142 yards in the game, scored on a 7-yard run.
In other games involving Packet-area teams, the Hun School remained undefeated with a 36-0 win over Lawrenceville. Imamu Mayfield scored on a pair of touchdown runs, while Simon Vadas threw touchdown passes to Josh Henderson and Luke Apuzzi. Gabe Cohen also returned an interception for a touchdown. The Raiders will face Peddie on Saturday in a game that will likely determine the Mid-Atlantic Prep League champion.
Montgomery stayed in the mix for a Central Jersey Group 5 playoff berth with a 29-27 win over Plainfield last Saturday. Jared Reinson scored on a touchdown run, Matt Stagnitta connected with Mitch Chungunov on a touchdown pass, Kyle Cutcinelli returned a blocked punt for a touchdown, and Grant Papa returned an interception for a touchdown for the Cougars. Montgomery moved into sixth place in the CJ 5 power points standings with the win.
WW-P North improved to 3-4 with a 29-12 win over Hamilton. Malik Thompson threw touchdown passes to John Owens and Matthew Phelan and he also returned an interception for a touchdown for the Knights. C.J. Markisz also ran for a touchdown in the win. 