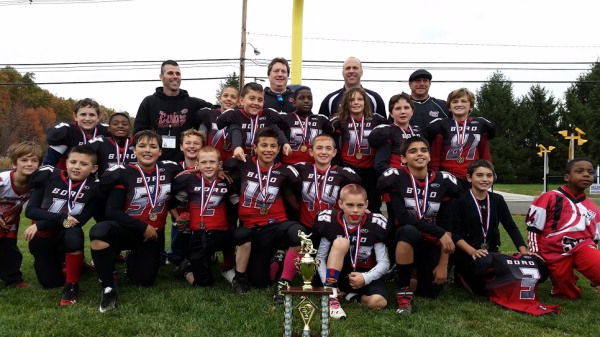 On Sunday, the Hillsborough Dukes Junior Pee Wees won their second Jr. Pee Wee Division III Jersey Valley Conference Championship, 14-12, over St. Cecelia’s.
The game was a nail biter from the start to its dramatic end. It was by no means an easy game, and both teams were playing hard to bring home the win.
The stands were literally roaring on both sides of the field, as the Dukes and St. Cecelia’s Golden Knights took turns trying to get the ball up and down the field.
Dukes Alex Bettinnez was spectacular as ever, scoring both TDs of the day for the Dukes, while Nick Colombaroni played a crucial role by scoring both the extra points.
With quarterback Jack O’Donnell in Florida at a family reunion, second-string QB Nick Colombaroni stepped into the role with confidence and determination. The dynamic between Nick and the offensive line was amazing, and didn’t miss a beat. Other offensive line players such as Chris Spinelli and Mike Caporaso, continued to help Colombaroni make his way down the field. Though tough at times, their persistence paid off.
The offense was equally countered with the Dukes defense. These boys held the Golden Knights back, their tackling and blocking never ceasing. Key tackles by Lucas Scott, Logan Press and Wade Leidl were huge as the opposing offense was stopped almost every time from scoring.
All in all, the fans were cheering and gasping audibly the entire game as this heartstopper came to a close. The Dukes’ side exploded as the last minute was counted down and Bettinnez got another first down, giving the Dukes their second victory, and making them the division champs.
The regionals will be in Iselin on Saturday, Nov. 7, at noon. The Dukes will play the winner of the Burlington division. 