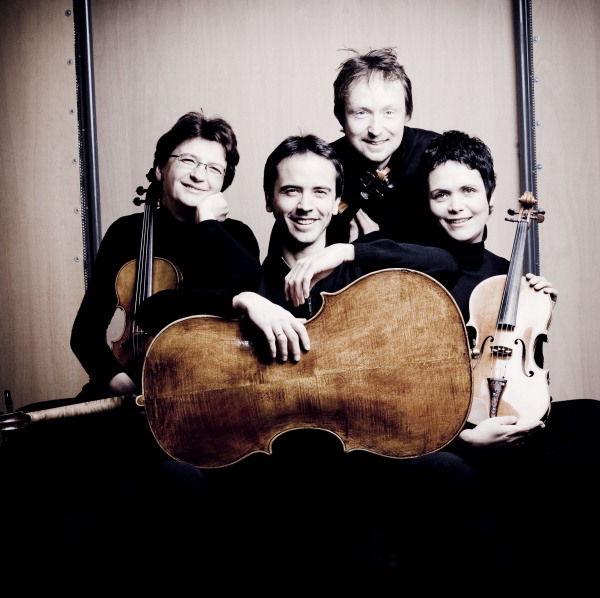 By Anthony Stoeckert
Daniel Sepec, violinist for the Arcanto String Quartet, says the group’s members had been playing together for more than a decade before they decided to perform a work by Robert Schumann.
”We all love Schumann, and after playing quartet more than 10 years, we wanted to play Schumann quartet,” Mr. Sepec says. “It was simply time. We played and Brahms and Mendelssohn, and the only composer (left) from the really well-known romantic composers was Schumann.
A performance of Schumann’ Quartet in A Minor Op. 41 No. promises to be a highlight of the Arcanto’s String Quartet’s Nov. 12 concert at Richardson Auditorium. The program, presented by Princeton University Concerts, will begin with Bach’s selections from The Art of the Fugue, followed by the Schumann quartet before concluding with Smetana’s Quartet No. 1 in E Minor “From My Life.”
Mr. Sepec laughs when he says that once the Arcanto String Quartet decided to play a Schumann quartet, they decided to play the first one. The joke is that it wasn’t chronology that led to the selection, but the music.
”We decided to play this very touching A Minor quartet,” Mr. Sepec says. “The beginnings are very touching. It begins quite lonely with the first violin, then the second violin comes in. We simply liked that piece and chose it.”
The quartet consists of Mr. Sepec and Antje Weithaas on violin, Tabea Zimmerman on viola and Jean-Guihen Queyras on cello. Once they decided a Schumann qurtet to include in a program, they talked about what should join it.
”We have this incredible Schumann quartet we wanted to play, and then we thought about what would fit that piece. As we know, Schumann very much loved Bach and appreciated him very much,” Mr. Sepec says, adding that Schumann wrote piano accompaniment to Bach’s Sonatas. That, he says, made Bach a good complement to Schumann.
As for the Smetana piece, Mr. Sepec says, it “is a very romantic and emotional and well-known piece. It’s very autobiographic.”
In addition to playing as a quartet, each member of the Arcanto String Quartet is a noted soloist. Ms. Weithaas has played as a soloist with such orchestras as the San Francisco Orchestra and the BBC Symphony; Ms. Zimmerman had a sonata written for her by Gyorgy Ligeti, and Mr. Queyras is in residence at London’s Wigmore Hall.
As for Mr. Sepec, he played on acclaimed recordings of Beethoven’s violin sonatas, performed on a violin owned by Beethoven.
”It was very special, of course,” Mr. Sepec says of playing Beethoven’s violin. “It’s a very nice violin from the 1700s.” He says the violin was restored to sound as it did in Beethoven’s time, and has a “B” scratched into it by Beethoven as well as a seal. Mr. Sepec jokes that Beethoven is one of the few people who made a violin more valuable by scratching his initial into it.
He also says that he was struck by how quiet the instrument was.
”For the recording, of course, you can bring the microphone very close to the violin and it works,” Mr. Sepec says. “But in a big concert hall, it doesn’t work at all. It definitely was meant for small rooms and private concerts.”
The Arcanto String Quartet will perform at Richardson Auditorium in Alexander Hall on the Princeton University Campus, Princeton, Nov. 12, 8 p.m. A pre-concert talk by Ruth Ochs will begin at 7 p.m. Tickets cost $25-$50, $10 students; princetonuniversityconcerts.org; 609-258-9220.