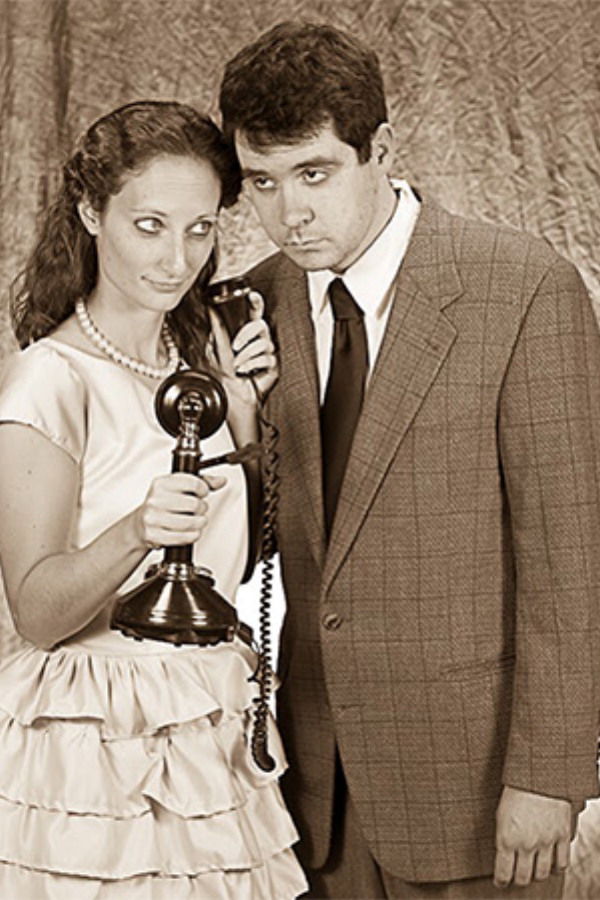 By Anthony Stoeckert
This is the year of It’s a Wonderful Life. The Princeton Garden Theatre will screen the classic movie on Dec. 10, and two stage versions are happening in our area this season. Bucks County Playhouse is bringing back it’s old-time radio play of the evergreen story, but before that, M&M Stage Productions is presenting a straightforward adaptation of Frank Capra’s movie at Kelsey Theatre in West Windsor through Nov. 29.
If you love the movie, all your favorite characters are here: George Bailey, his wife Mary, Clarence the Angel, the wicked Mr. Potter, and even Nick the bartender. It’s a great story, sure to touch even the coldest of hearts, and this production has one standout performance, but overall, it makes for a clunky night.
That’s because the script by Doug Rand does little to adapt the film for the stage. It is essentially a recreation of the film with many short scenes, which makes for a lot of scene changes, which hurt the show’s momentum. There’s one famous scene involving a swimming pool that I can’t imagine understanding if I wasn’t familiar with the movie.
Just in case you’ve never turned on a TV during the holiday season, It’s a Wonderful Life is about George Bailey (played by Tim Moran). As the story opens, George is desperate enough that he’s about to kill himself. Enough people are praying for him that the angels have decided to send someone down to help George. But a second-class angel named Clarence (Sean McGrath) is on call, and there’s concern that he isn’t up to the job. But the head angel has faith, and if Clarence does a good job with George, he’ll finally get his wings.
Clarence’s bosses show him George’s story of growing up in the small, upstate NY town of Bedford Falls, dreaming of making his mark on the world. We have little doubt that George has the talent and work ethic to fulfill his dream of seeing the world and building cities, which makes each of George’ setbacks all the more painful.
George never fulfills those dreams for several reasons, but one of the main ones is Mr. Potter (Walter W. Smuth), the wealthiest and most powerful man in town. The Bailey Building and Loan, the business started by George’s father and Uncle Billy (played by Matthew Cassidy, who’s just terrific), is the only financial institution in town that isn’t owned by Potter. George fears what will happen to the people of Bedford Falls if Potter gets a hold of the Building and Loan.
George’s life is one of survival, he has a wonderful wife in Mary (Angela Fasanella), close friends, and is helping people fulfill the dream of owning a home. But life is a series of hurdles, and when Uncle Billy loses $8,000 one Christmas Eve, George reaches his breaking point.
Mr. Moran’s best moment comes at the end, when George learns that his life is pretty darned wonderful. He expresses true joy and captures a bit of Jimmy Stewart’s essence.
But the standout is Mr. Cassidy. He brings humor and life to Uncle Billy, but doesn’t copy the movie performance of Thomas Mitchell. He gets plenty of laughs, and while Billy is forgetful in Mr. Cassidy’s hands, he isn’t a buffoon.
There is one scene that’s done just wonderfully here, early in the play when George and Mary are kids. George has lost his hearing in one ear after saving his brother Harry’s life, and one day, at the pharmacy where George works, Young Mary (Julia Patella) checks to make sure she’s talking toward George’s the bad ear before saying, “George Bailey, I’ll love you till the day I’ll die.” Young Miss Patella says the line with charm, honesty and innocence.
It’s a Wonderful Life continues at Kelsey Theatre on the campus of Mercer County Community College, 1200 Old Trenton Road, West Windsor, through Nov. 29. Tickets cost $18, $16 seniors, $14 students/children; www.kelseyatmccc.org; 609-570-3333.