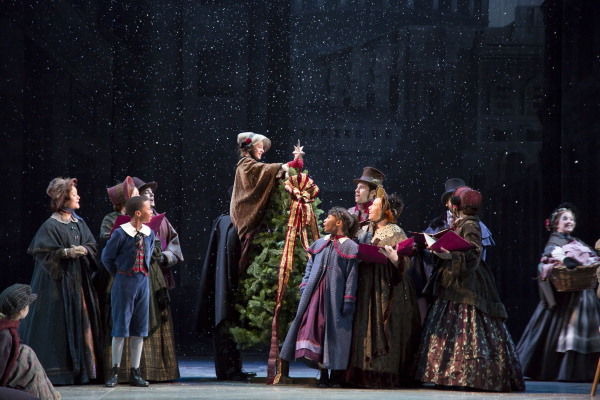 By Anthony Stoeckert
Things are going to be different at McCarter Theatre next Christmas.
Oh, Scrooge will still be there, along with Tiny Tim, Bob Cratchit and a few spirits, but this year is marking the last go-around for McCarter’s current version of A Christmas Carol.
Just exactly what that means, McCarter isn’t saying, other than a “re-imagined” version of Dickens’ classic tale will make its debut next year. Does that mean a new script? New sets? A new cast and crew? As of this writing, McCarter isn’t saying.
And that’s just as well because the current version of A Christmas Carol, which Michael Unger has been directing since 1999, is quite wonderful and deserves our full attention for its last run. It will play at the Princeton theater, Dec. 4-27, and if you haven’t seen it, you really should.
It’s faithful, but not trapped by Dickens’ story. It has humor, a few fun scares, some nifty special effects, a huge puppet and, most of all, heart. The special effects never get in the way of the story. I’ve seen it about six times, and I never walk away thinking about the giant puppet that serves as the Sprit of Christmas Yet to Come. Instead, I’m thinking of Scrooge’s journey, including a heartbreaking moment when Scrooge sees his younger self let go of true love, and an ending involving a music box that gets to me every time.
”You feel the story more than spectacle, because whatever happens is done to support the story… With this version of ‘A Christmas Carol,’ the story always comes first,” Mr. Unger says. “It’s one of the greatest stories every written, so why get in the way of it? If you stay out of the way of that story, you’re just fine. If I can find ways to support it, and have a little magic here, and a little spectacle here, as long as it supports the story, fine. But if it ever overtakes, we’re not in a good place.”
When asked how he feels about directing this Christmas Carol for the last time, Mr. Unger responded, “melancholy,” but more than that, he’s appreciative of the run the show has had.
”I would have continued it for as long as I could,” he says. “The production when originally conceived was supposed to last about 10 years, the production before this… I think did nine, so we got 16 out of our production, which is unprecedented and a lot longer than it was supposed to last.”
McCarter has presented three versions of A Christmas Carol since 1980. Mr. Unger directed the prior version in its last two years, and has directed this version, with an adaptation by David Thompson, every year it has been staged in Princeton, starting in 2000.
”All good things must come to end, but I kind of wish they didn’t,” he says. “But the theater feels it’s time to move on, which I totally understand, but I’d be lying if I didn’t say I was sad about it, because so much of my life and my career, and so many great opportunities have happened right here at McCarter.”
Mr. Unger has worked with quite a few Scrooges over the years, and this year he is working with one of his favorites, Graeme Malcolm, who has played Scrooge at McCarter five times before.
”This is not just hyperbole, Graeme goes deeper every year with this show,” Mr. Unger says. “The first-read-through with the just script (this year), I swear he was deeper than he’d ever been. He’s finding deeper connections and more miles to travel; it’s outstanding how that guy gets stronger and stronger. Every year I see him, and I think, ‘He can’t get any deeper than that.’”
One of the things Mr. Unger says he’s most proud of about McCarter’s Christmas Carol is that in many productions, Scrooge is played as a grumpy guy, while Mr. Thompson’s script, and Mr. Malcom’s performance, show how Scrooge became the man he is.
”It’s Scrooge’s childhood that makes him that way, and one of the things Tommy Thompson has done so well is to give us that back story and show us in action why Scrooge is the way he is,” Mr. Unger says.
I’ve interviewed Mr. Unger a few times about A Christmas Carol over the years, and I’ve learned that he doesn’t just brush off the script and do the same exact thing year to year. He’ll add touches here and there, bits of staging, changes to the script. Even approaching his final stint directing this production, he was talking with Mr. Thompson about a change to the script that came about after a rehearsal.
”I’m proud to have worked for a theater that really cherishes it year after year, and has allowed me to make changes, whenever I feel the need, to keep exploring and developing, to keep it fresh,” Mr. Unger says. “I can’t imagine a place that cherishes the show more than McCarter. Nor a place that has the resources to do a production of this scale, with this beauty and this production team. It’s fabulous.”
A Christmas Carol will be performed at McCarter Theatre, 91 University Place, Princeton, Dec. 4-27. For tickets and information, go to mccarter.org or call 609-258-2787.