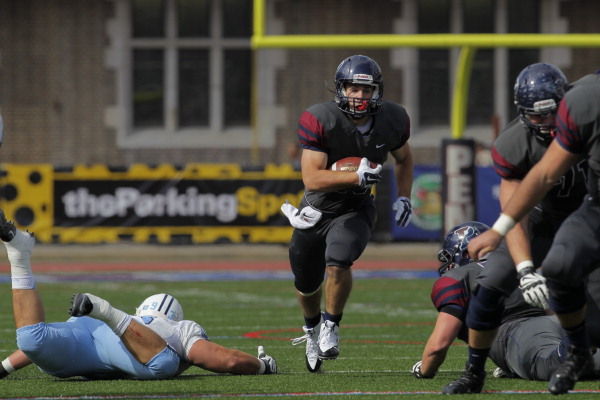 By Bob Nuse, Sports Editor
The University of Pennsylvania couldn’t have been thinking about an Ivy League championship after a 1-3 start that included a 41-20 loss to Dartmouth in its league opener.
But this was a different sort of Quaker team. It was a team that saw big things ahead and instead of continuing on a downward trend ran off six straight wins to finish the season 7-3 overall and 6-1 in the Ivy League to earn a share of its 17th league title.
“At one point we were 1-3,” recalled West Windsor-Plainsboro South graduate Brian Schoenauer, a junior who led Penn in rushing this season. “We had lost to Lehigh and beaten Villanova, but them we lost to Dartmouth and Fordham. So it was definitely kind of hard at that point to imagine we would be where we are today.
“But our coaches were able to help our focus and we stayed focused with the process of preparing for each play rather than the outcome. One of the big things they hammered home was playing for each other and someone other than yourself. As the season went on we bought more and more into that and trusted the plan and we started to click.”
After a tough 48-45 loss to Fordham to slip the 1-3 the Quakers started to turn their season around with a 42-7 win at Columbia. They followed that with wins over Yale, Brown, Princeton and Harvard before closing the season with a 34-21 win over Cornell in the season finale.
“It was pretty cool,” Schoenauer said. “It felt like we were getting better each week. It is a testament to the guys on the team and their commitment to the process and the coaches commitment to us. It’s a great group of guys. We have awesome seniors leadership. The seniors are the ones who helped the whole team to buy into what the coaches were getting is to do.”
In his first season as a full-time starter, Schoenauer was a huge part of the Quakers’ success. He finished the season with a team-high 652 yards rushing and six touchdowns. In the title clinching win over Cornell, Schoenauer rushed for 118 yards and scored the first touchdown of the game.
“One of the things we really harped on all year was to just do your job,” said Schoenauer, a two-time Princeton Packet Player of the Year. “You don’t have to be Superman and do anything crazy. We played some great football over the course of the year. The coaches put us in position to do well. It was awesome because different players stepped up each game. That is a testament to our team and how hard the guys worked.
“Players were taking advantage of the opportunities they were given. It was a team effort the whole season, which is why you play. It’s the ultimate team sport.”
With each Ivy League win the Quakers looked more and more like a team that could win a title. When they went to Harvard and won, 35-25, the title was in reach if they could beat Cornell.
“It is easy to get ahead of yourself,” Schoenauer said. “One thing the coaches did well was to get us to focus on the next play, the next snap, the next practice. It crossed our minds that we had won a couple in a row and maybe we could do something special. But the coaches helped us to focus on the process of preparing and the things we can control and to treat every game like each week was the biggest week.”
Schoenauer and a talented group of players will return next season for the Quakers. And during his senior year he’ll have an extra cheerleader on hand as his younger sister, Kathryn, will be attending Penn as well.
“I’m super excited to have my little sister around for a year at Penn,” Schoenauer said. “It’s been a crazy season and a crazy ride. We have a great group of guys and coaches. I’ve loved my time here and it’s crazy to think there is just one more year left. People always say the time goes by so fast but it really has for us.” 