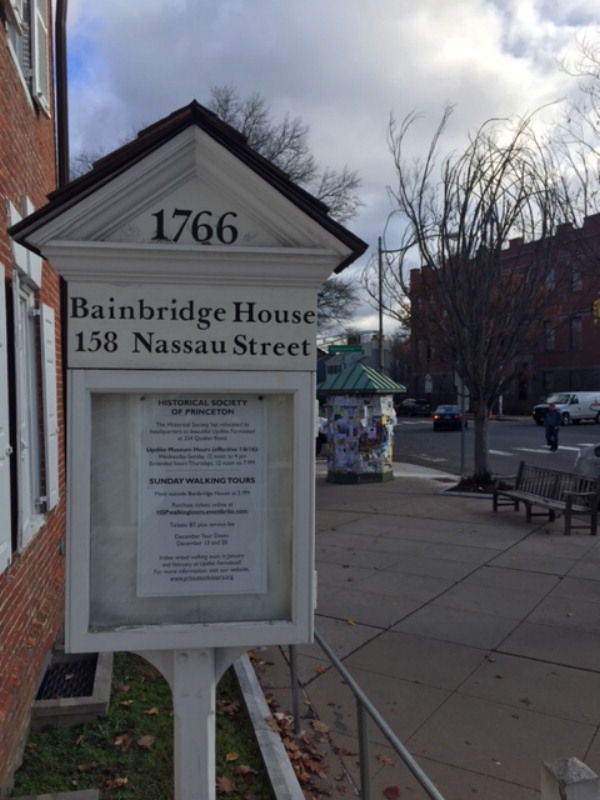 By Philip Sean Curran, Staff Writer
Historic Bainbridge House on Nassau Street will be turned into office and event space and an information center for cultural goings on, said Princeton University, the owner of the 18th-century building.
The school said Wednesday that it planned to renovate what used to be a private residence and later the home of the Princeton Public Library and, more recently, the offices and museum of the Historical Society of Princeton.
In a university-issued press release, Princeton said the building would include galleries, gathering spaces and a ticketing center. Visitors also will be able to get information there about cultural events at the school, the release said.
In addition, employees from the University Art Museum will have offices there and staff the facility, the release said.
The building is due to re-open in the fall of 2017, the release said.
Princeton has spent the past year thinking about how to use the Bainbridge House, given it knew the Historical Society was going to relocate, said Kristin S. Appelget, university director of community and regional affairs, by phone Wednesday. Ms. Appelget also is a board member of the Historical Society.
The organization had been in the building since 1967, said Historical Society executive director Erin Dougherty on Wednesday. But as of Tuesday, the Society is officially in its new home, the Updike Farmstead, on Quaker Road. For her part, Ms. Dougherty applauded the way the university plans to reuse the Bainbridge House.
Princeton said it had hired an architectural firm to assess the building, one that dates to 1766. Through that long history, the building has taken on different iterations: a private residence, a student boarding house, a public library and the historical society offices and museum.
It was not immediately clear whether the municipal historic preservation board would have to approve the renovations or not. Ms. Appelget said the “approval process” would depend on what the plans are.
The university hired a New York architectural firm, Murphy Burnham & Buttrick, to help guide officials.
Bainbridge House is located directly next to the Princeton Garden Theatre, the two-screen cinema located downtown. The university acquired the property in 1877 and, since 1910, has leased it for a $1 a year first to the library and later to the Historical Society, Ms. Appelget said.