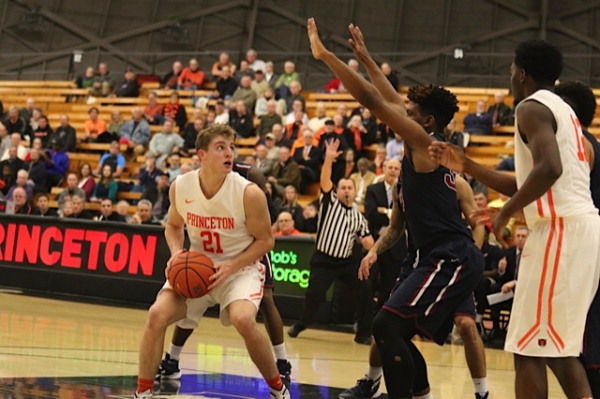 By Bob Nuse, Sports Editor
The Princeton University men’s basketball team is 4-0 for the first time in 18 years and Mitch Henderson feels like his team still has a lot of improving to do.
“Defensively we’re improved,” Henderson said after the Tigers topped Fairleigh Dickinson, 91-61, on Monday night. “Pete (Miller) got into foul trouble and played nine minutes tonight and we were able to hang in there with a freshman and a sophomore that hadn’t played a ton for us.
“I think each of our games has been really different and that has been the strength of this group. It’s a diverse team with a lot of different skills and we can shoot it. I don’t think we feel like we’ve played that well yet.”
Princeton opened the season with a win at Rider before coming home to beat St. Peter’s, Lafayette and FDU. In the last two wins, Princeton has scored 104 and 91 points, respectively, with different players chipping in each on the offensive end.
Against FDU, Henry Caruso made his first 10 shots and finished with 27 points and 10 rebounds, while Steven Cook added 17 points and six rebounds.
“We just got into a good flow and got comfortable once we were able to get into our flow of the game and get a good rhythm,” said Caruso, who leads the Tigers in scoring at 18 points a game. “We got off to a slow start but once we were able to establish a good pace and calm down we were able to get good shots.
“We’re just trying to focus on the details and get better every day. We’re not necessarily focusing on long-term goals right now. It’s just really trying to get better every day and take it one game at a time.”
Princeton’s balance and chemistry seem to be at a high level already in the early part of the season. After Caruso’s 18 points a game, seven other Tigers are averaging between seven and 11 points per game. And in the four games, three different players have been the team’s high scorer.
This Princeton unit seems to enjoy playing together and has a nice chemistry on the court.
“I think it is them,” said Henderson, whose team will look to go 5-0 for the first time since 1997 when they play at Stony Brook on Saturday. “I think of the way they talk and work together. They like each other. My concern with the team is that’s good and fine, but in practice there has to be an edge. It’s great that they like each other off the floor but on the floor they need to compete and they do that. You can like each other all you want but we’re coming up on a very difficult road game and I think it is time for us to take another step forward.
“I think this is a good group. Going 5-0 would really be something. I think Stony Brook is very good.”
The Tigers are off to their best start since the 1997-98 team opened the season with seven straight wins. They will play road games at St. Joseph’s and Lipscomb before returning home on Dec. 17 to face Liberty.
“We just have to keep staying hungry and wanting to compete and not take anything for granted,” Caruso said. “If we stay hungry and get after it that is when we are really at our best. We all really get along with each other really well on and off the court. I think that is important. There hasn’t been any tension in the locker room or whatnot and I think that shows.”
The Tigers had four players in double figures in the win over FDU, with Amir Bell adding 13 points and Devin Cannady 10. It was Caruso who stole the show on the offensive end with his career-high 27 points. Whether scoring or not, all the Tigers seemed to contribute. Spencer Weisz made just one of seven shots but contributed to the win in a big way.
“I thought all of his shots were very good,” Henderson said. “He had seven assists, no turnovers, eight rebounds and was sort of in on a lot of really important plays for us. He makes his presence felt.”
As did Caruso on the offensive end and on the boards.
“Last year I called him the whirling dervish,” Henderson said. “He’s just consistent every day. He’s a workhorse and does everything hard all the time. And I have never seen anybody who does that who doesn’t get a lot better.” 