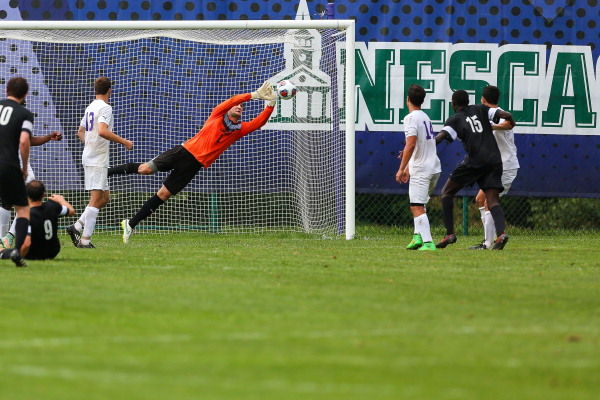 By Bob Nuse, Sports Editor
Thomas Bull capped off his college soccer career the same way he ended his high school career — on top.
The Montgomery resident played every minute in goal this season for the Amherst College men’s soccer team, which captured the Division 3 national championship with a 2-1 win over Loras.
The Purple and White went through the regular season undefeated but were upset in the opening round of the NESCAC tournament. With some additional rest after being eliminated early in the conference tournament, Amherst was set for a strong run through the NCAA tournament.
“We started off 14-0 so we were feeling really good,” said Bull, who made four saves in the championship game. “We hit rough patch at the end and tied our last regular season game and then lost in the NESCAC tournament.
“We had a tie and a loss in the week and that deflated us a little. But once we got back in the NCAA we knew we had the firepower and we knew we could win it. I think the rest helped because we finally had a healthy squad. The two weeks off helped us.”
Amherst defeated Morrisville State, Lycoming and Trinity to reach the national semifinals. They topped SUNY-Oneonta in a shootout in the semis before the win in the finals. In five tournament games Bull allowed just one goal.
“It was a great way to cap off my career,” said Bull, who was named the tournament’s Most Outstanding Defensive Player. “It was a pretty cool good way to out. Our path was similar to Tufts last year. They finished first in the NESCAC and lost their first game and went on to win the national championship.”
Bull played his final two years of high school soccer at St. Benedict’s, where he was part of the top team in the nation. At Amherst he finished his four-year career as a starter with a 67-3-13 record.
“At St. Benedict’s we lost two games in two years and then her at Amherst we’ve lost three in four years,” Bull said. “There have only been five losses and every one was by one goal. It was a good run.
“This year our backline was all juniors. Our outside backs started the two years and our center backs were great. We had a really great backline unit that limited the chances for the other teams.”
For Bull, the decision to attend Amherst worked out for the best. And his career was capped off by an 18-1-2 season that included a national championship.
“Going into the recruiting process our coach, Justin Serpone, really stuck out to me as a guy I wanted to be my coach for four years,” Bull said. “What he has built at Amherst is special. He has not on built success on the field but also being part of the family atmosphere of the Amherst team.”
Bull will finish up at Amherst this spring and then see what possibilities are out there as far as continuing to play soccer.
Chances are there will be plenty of opportunities for a goalie that has lost just five times in six years and has a national title under his belt.
“My goal is to try and play after I graduate,” Bull said. “I’ll try a couple trials domestically and abroad. I definitely am trying to play somewhere after I graduate.”