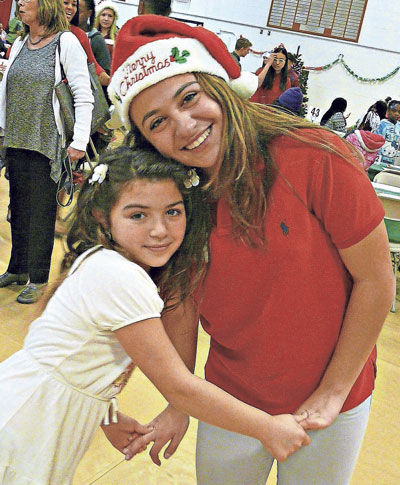 Anyone who doesn’t believe in Santa Claus should’ve been at The Pennington School on Saturday for the annual HomeFront Christmas party.
The giving spirit was rampant as the school hosted — even embraced — 400 kids and parents, who are clients of HomeFront, in the spacious Sparks Gymnasium. The party was supported by the volunteer efforts of the entire school community – students, their parents, the staff and the faculty. Sodexo, the school’s food service, pitched in by donating a sumptuous hot turkey Christmas lunch.
HomeFront is a local charity whose many programs and services are aimed at eliminating homelessness in Mercer County.
In the big gym, a DJ played music while the families had lunch and socialized. Pennington students danced with the children or did artwork with them. Near the end of the full-course holiday meal, other students scooped ice cream on demand. Some guests and students went out in the sunshine to romp on the artificial turf of the football field.
With Dean of Students Chad Bridges acting as coordinator and greeter, each family got to visit Santa’s domain. Kids went into a backstage area where Santa was ready to receive them. Then the children shopped for their parents’ gifts, choosing from an array of jewelry, watches, scarves, candy, candles, slippers and toiletries. The presents were then gift-wrapped by smiling students dressed like elves.
Pennington junior Devon Duch said, “Everybody deserves the opportunity to pick out gifts for their parents. Christmas is not just about receiving, but giving, too.” For kids who don’t have a lot options, “it’s something they get to decide about.”
Meanwhile, their parents went into a smaller gym to select presents for their children. Arranged attractively on elf-tended tables were footballs, basketballs, games like Clue and Jenga, hats, gloves, scarves, chemistry sets, jigsaw puzzles, dolls, Play-doh, crayons and much more. Then their selections were wrapped by parents of Pennington students.
“This is a blessing!” said Melinda M., who was there with her four children, ranging in age from 10 to 15. “It’s very exciting and unexpected. The wonderful dinner, dancing, playing football and getting to see Santa Claus — it’s a beautiful day and I’m very appreciative. The children enjoyed it so much.”
Pennington teacher and former Dean of Students Tom Liwosz recalls the origin of the event about 20 years ago. He had been volunteering with HomeFront delivering meals, when he found out that HomeFront was suddenly without a venue for its upcoming Christmas luncheon, and the rest is history.
Headmaster Bill Hawkey estimated that more than 200 of the school’s 500 students in grades 6-12, were helping at the party, but factoring in students who had brought in gifts or made cash donations, participation was close to 100 percent.
“Mr. Chris” Marchetti, who runs a HomeFront program for kids called Joy, Homes & Dreams, explained that Pennington School is much more than an institutional benefactor — the students are “more like blood brothers and blood sisters.” Although the HomeFront and school populations gradually turn over, the students and children know each other and “mix well” year-round, as the HomeFront kids attend various events, including school plays and frequent “Gym and Swim” sessions. Pennington students frequently go off-campus to volunteer for HomeFront, too.
Pennington junior Carolyn McWhirter, a peer leader, said it’s good “for us to get out of our little bubble of Pennington, New Jersey,” and see how different people live. She said the party was “genuinely fun, and everyone is so appreciative.”
Dean Bridges, another student peer leader, said the project, fund raising and all, is student-run. He noted that Pennington does not require anyone to do community service — “we do it because we really care.” He and teacher Erin O’Connell serve as advisers for the party.
“We benefit so much more than the people we serve,” said Mr. Liwosz.
He might get an argument from some of his guests. Latosha W., mother of five, said this is her fifth of the Pennington parties and they are “beautiful” events that “bring families together.”
Andira E.’s four children range in age from 3 to 10. “I grew up without my mom, and didn’t have any family,” she said. “I look at Chris as my family. I grew up with him and Connie (HomeFront director Connie Mercer).”
As a child, living in a shelter, “we didn’t have the freedom to do different things,” so coming to the Pennington Christmas party was a big deal, she said. “It makes you feel more alive and more loved.”
The Pennington School motto is “Honor. Virtue. Humility.” Dean Bridges says “humility” is underscored by the self-less efforts of the students. But maybe this week they can be excused for feeling just a little bit of pride. 