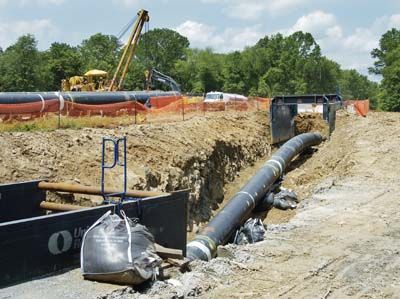 By Philip Sean Curran, Staff Writer
A new natural gas pipeline running through Princeton was expected to be turned on this week, the municipal engineer’s office said Tuesday.
Williams, the Oklahoma-based company that owns the line and had it installed this year, was looking to take that step on or before the end of Wednesday, town engineer Robert V. Kiser said by phone. That was dependent on the company getting approval from the Federal Energy Regulatory Commission, the agency that approved the project in 2014, he said.
“It’s been a long time coming,” said Williams spokesman Christopher L. Stockton by phone.
The company installed a new 42-inch-line through about 1.2 miles of Princeton, with the project also spanning parts of Somerset and Hunterdon counties and Pennsylvania. The process took two to three years, from going through the regulatory process, meeting with community members, getting FERC approval to go ahead last December and finally having crews install the line.
Williams has been looking to increase its capacity to transport natural gas from the Marcellus Shale in Pennsylvania to its customers. The company already owns a 36-inch pipeline through the area, including Princeton.