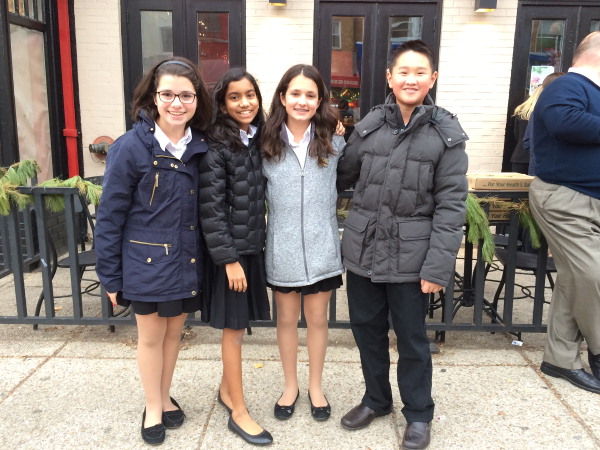 Cranbury School students Christy Phillips, Elaina Phillips, Anya Raju and Justin Yang traveled to Washington with the Cantus Choir of Westminster Choir College Conservatory Dec. 21 to sing at the White House as a part of the holiday events there.
The choir performed with cellist Tomasz Rzeczycki and James Goldsworthy as accompanist in the Grand Foyer of the White House, the large hall that is directly behind the Front Portico. Also featured as part of the performance was the famous grand piano given to Franklin Roosevelt for the White House in December 1938, by Theodore Steinway.
The surrounding rooms were decorated with various themes, including a family of large penguins at the entrance and a snowman family in the first lady’s garden.
Patricia Thel is the director of Cantus and the founder and director of the Children’s Choir program at Westminster Conservatory of Westminster Choir College in Princeton, NJ.
The choir is composed of 31 auditioned students from Cranbury, Princeton and surrounding areas and has a history of these performances, having performed at the White House twice now during the Obama administration, twice during the Bush administration and during the Clinton administration.
Locally, Cantus has performed at Bristol Chapel at Westminster Choir College, Richardson Auditorium at Princeton University, Drumthwacket, Nassau Presbyterian Church and at the United Nations.