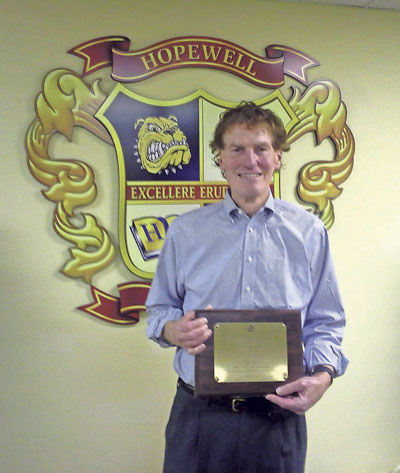 By Frank Mustac, Special Writer
PENNINGTON — Jon Butler was recognized at the most-recent Hopewell Valley Regional School District Board of Education meeting for his work on the board over the last three years.
Superintendent Thomas Smith presented the Pennington resident with a commemorative plaque on Dec. 14 in appreciation for his “dedication and service to the Board of Education from 2012 to 2015.”
Citing “other time commitments” as a reason for not continuing on the school board, Mr. Butler did not run for re-election in November.
Joanna “Jenny” Long will take Mr. Butler’s seat on the board after swearing an oath of office at the board’s upcoming reorganization meeting on Jan. 4. She won the seat running uncontested on the Pennington Borough ballot on Election Day.
Lisa Wolff, president of the Board of Education, praised the outgoing board member.
“Jon has never disappointed from the first day that I met him,” Ms. Wolff said. “He has a quiet wisdom about him that you don’t find everywhere.”
“The people who have seen him on the board know that Jon is always steady. He is even. He is smart. He is wise. I am very confident with any decision he brings us.
“Jon has brought a unique perspective. He is an executive director himself, so he has to report to a board of directors. So he understands a board from both sides.”
Mr. Butler has been the executive director of national Pop Warner Little Scholars for 21 years, according to a biography published on the Hopewell Valley Regional School District website.
“Anyone can go to him, and there is many a time that I called Jon for advice, and I knew that I could count on it every time,” Ms. Wolff said.
“I just wanted to thank you from the bottom of my heart for being on this board. We will miss you a lot,” she told Mr. Butler, who then thanked the board president.
“You talked about being steady,” Mr. Butler said. “I believe very strongly in a saying that I have on a refrigerator magnet, of all things: ‘Leadership is the art of being able to hide your panic from others.’”
“It’s been a pleasure to be on this board,” he said. “I commend the board overall. I think we found a balance where we can disagree without being disagreeable. I think that we are, as a group, very productive.
“If you look at the spectrum of over-involved micro-managing boards versus hands-off arms-length boards, I think we have a balance somewhere in the middle.
“I also want to commend the administration. It’s been a real pleasure in all and any dealings I have had with them,” Mr. Butler said.
Superintendent Smith also lauded Mr. Butler, describing him as “a great guy” who “really got it.”
“For those don’t know, Jon really helped us develop our concussion policy — something that is a first in the area,” Dr. Smith said.
With the help of Emil Matarese, a neurologist and director of the concussion program at Capital Health Medical Center, a set of protocols was developed for students and student athletes suffering from such injuries, the superintendent said in a September interview.
The protocols are designed, in part, to provide consistent academic support for students with concussions, including providing accommodations they require, for example, if they need extra time to complete school work.
“Jon was really instrumental in us bringing that to fruition, in addition to his feedback with personnel and other (school board) committees,” Dr. Smith said on Dec. 14.
“I appreciated your guidance,” the superintendent told Mr. Butler. “Jon, you will be missed.” 