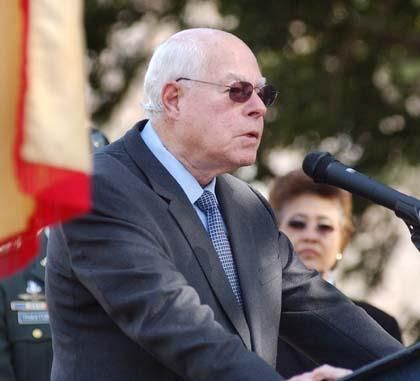 By Philip Sean Curran, Staff Writer
The leadership of the Princeton Council will change in 2016 with Councilman Bernard P. Miller announcing Monday that he would not seek another term as council president.
Mr. Miller has held that post beginning in 2013, but decided it was time to step aside for someone else. In a letter to the editor that he provided local media, he wrote that the position should be rotated among the members of the governing body.
“Although the term of council president is one year, the term of a member of council is three years. For this reason, I believe that the practice of serving not more than three years should also apply to the position of council president,” he wrote. “I also believe that the opportunity to serve as council president should be rotated amongst the members of council in order of seniority, so that all members of council may have the opportunity to serve as council president.”
Councilman Lance Liverman, the next most senior member of the governing body dating to his days as a Township Committeeman, said Monday that he was interested in replacing Mr. Miller, although he said he did not know if he had enough votes.
Mr. Miller said he has endorsed Mr. Liverman for the position.
“I’m not sure,” said Councilwoman Jo S. Butler, when asked Tuesday if she were supporting him.
She said she thought Councilwoman Jenny Crumiller would “throw her hat in the ring” and, if so, she said she would support her instead.
Council will choose a council president at its reorganization meeting Jan. 4.
One duty of council president is to fill in as mayor when Mayor Liz Lempert is away. The post also pays $12,500, a little more than the $10,000 that the five other council members each receive.
Mr. Miller, a Democrat, is a former Township Committeeman and mayor. He was elected in 2012 to serve on the consolidated council and was re-elected in 2014.