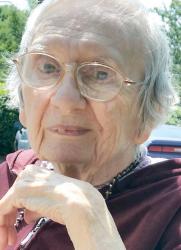 She graduated from South River High School in 1945. She fell in love and married Albert William Wenzel on Thanksgiving Day, Nov. 25, 1948. They lived in Milltown and had three children: Corey William, Kurt Allyn and Kristine Maryann. In 1974, they moved to Naperville, Illinois.

Evelyn’s beloved husband, Albert, died suddenly while on vacation in August 1975. Evelyn persevered to live a happy, long life, though she never remarried. She had an adventurous spirit and made it to places like California, Texas, Colorado, Florida, Hawaii, Italy, France and Ireland.

Evelyn was a devoted Catholic, praying for others more than praying for herself. She attended Our Lady of Lourdes Church, Milltown, and St. Raphael’s Church, Naperville, Illinois, among other places of worship. She was a kind, generous person, often helping others. She had an endearing laugh and great smile that would always make you feel good.

Evelyn leaves her loving memories to be cherished by her three grown children, 10 grandchildren and one great-grand child on the way in April 2016. She loved them all.

Per Evelyn’s wishes, no viewing or services will be held. She will be cremated per her instructions and be buried in a plot at Saints Peter and Paul Cemetery, Naperville, Illinois, next to her beloved husband, Albert, who has waited 40 years for her arrival. In lieu of flowers, donations may be made to Catholic Charities. Cards may be sent to Kurt Wenzel, 4246 Central Park Lane, Aurora, Illinois, 60504.