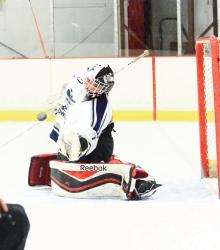 Howell High School goalie Bobby Dovenero gloves a shot during the Rebels’ Dec. 22 game against Westfield High School at the Jersey Shore Arena in Wall Township. Howell won the non-conference matchup, 4-1, to improve to 5-2 this year. FRANK GALIPO Having gotten a taste of the Prudential Center in Newark, also known as the Rock, the Howell High School ice hockey team wants more.

The Rebels made a stunning run to the NJSIAA Public A championship game last winter, getting to play at the Rock, home of the NHL’s New Jersey Devils. It was an experience that no one on that team will forget and, for the core coming back from that team, the goal is to get back and finish what it didn’t last year, according to head coach Bill Daley.

The Rebels want to prove they are not a one-and-done team.

They lost the finals in their historic season to Randolph High School, 2-1. By getting to the finals, Howell became the first Freehold Regional High School District ice hockey team to play for a state championship.

This year’s Rebels will differ from last year’s Shore Conference A North Division championship team, which finished 22-5. The team graduated much of its offense, including the program’s all-time leading scorer, Kyle Hallbauer.

“It’s going to be more of a defensive-type season,” Daley said.

The Rebels have a franchise goalie in junior Bobby Dovenero, who is in his third season between the pipes for Howell. He has proved to be a difference-maker and his play breeds confidence in the Rebels. He has a .911 save percentage thus far this season and has allowed fewer than two goals a game

“With Bobby in goal stopping everything, the team feels he can steal a win from any team on any given night,” Daley said.

Getting back to the Rock is a realist goal for the 2015- 16 Rebels because, despite the loss of some key offensive players, they have a lot of talent back.

“We are returning a good core group of boys that helped Howell get to the state finals last year,” Daley said. “With the return of captain Anthony Gallicchio, Zac Turcotte, Matt Goeller, Zac Mazik, Louie Kuka, Greg Bernhardt, Anthony Mauro, Mike Camaroto and Evan Ganz on offense and captain Ryan Damelio, captain Steven Ramos, newly converted [defenseman] Kyle McEvoy (played third line forward last year), Sean Mylod, Mat Nekrasz and Tyler Kunzmann and the return of captain goalie Bobby Dovenero and backup goalie Eric McMahon, we have a strong core that knows what it takes to get us back to the finals and this year make history.”

Howell has received help where it needed it most — scoring — from Christian Brothers Academy transfer Timmy Clifton. He is playing on the first line, which is centered by Gallicchio with Turcotte on the opposite wing.

In the team’s first seven games (5-2), Clifton has scored eight goals and assisted on five. Gallicchio has six goals and seven assists.

“We are a fast team with great team chemistry,” Daley said. “The boys have set their goal. We have a tough schedule this year with games against teams from every conference.”

Patriots ready for a rebuild

Freehold Township High School, which, with Howell, has been the Freehold Regional High School District’s most consistent team, is young this winter.

Head coach Mike Celano noted that his team has no seniors. The Patriots have six juniors and a pair of sophomores on the roster, and the rest of team is made up of freshmen.

“Needless to say, this will be a rebuilding year,” Celano said. “We are going to take our lumps and learn our lessons.”

The Patriots appear to be fast learners. They took their lumps early, going through a five-game winless streak (0- 4-1) that had them at 1-4-1 to start the season. But three straight wins evened the record at 4-4-1 and have the Patriots looking like a team with a future in the postseason.

The Patriots’ strength this year is the back line and goal. Freehold Township has defensemen Julian Kislin, Erik Borshchevsky, Ryan Ford and Matt Golba back from last year’s 12-8-2 squad. Junior Nick Raiola is a three-year starter in goal and has a .930 save percentage this season.

Halvorsen has 13 goals in the club’s nine games. Liebross leads the team in assists with nine.