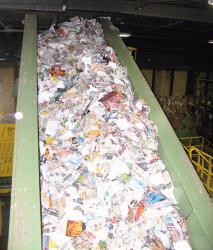 According to the most recent data, Middlesex County was credited with recycling 71 percent of its total waste generated in one year, beating even its own best record. PHOTO COURTESY OF THE MIDDLESEX COUNTY IMPROVEMENT AUTHORITY Middlesex County continues to set the pace as the state’s top recycler, as noted by a recent award from the New Jersey Department of Environmental Protection (DEP).

The county recycled 71 percent of its total generated waste in 2013, according to the DEP’s most recent data.

Morris County ranked second in that lineup with a total of 66 percent.

“Although it trails back a few years, this is the most up-to-date information the DEP provides,” said Ed Windas, manager for the Middlesex County Improvement Authority Recycling (MCIA). “The towns submit information to the state, and the state tabulates it. It just so happens, we’re No. 1.”

These latest findings mark the 17th time that Middlesex has surpassed a state mandate, which has required counties to recycle at least 60 percent of their annual total waste since its implementation in 1995.

While Windas is unable to pinpoint the exact source of the 2013 recycling surge, he suspects that improving economic conditions and their trickle-down effect on consumer buying, manufacturing and even road work could factor into the DEP’s tally.

“This is the highest rate that we’ve ever recorded here in Middlesex,” he said. “It’s also the sixth time and the second consecutive year in a row that we’ve held the top recycling slot. But it’s really a joint effort that involves many players.”

Waste management companies and haulers, businesses, recycling coordinators and facilities, as well as the Middlesex County Solid Waste Management Division, alongside the MCIA Recycling Division, have all collected the figures needed to confirm the 2013 data.

“We look at this as a group effort,” said Middlesex County Deputy Freeholder Director Carol Bellante. “It’s the residents, it’s the employees, it’s business owners — it’s everyone putting their best foot forward, as we all look to lessen our carbon footprint.”

The MCIA’s curbside recycling program services 14 municipalities, which amount to approximately 90,000 residents, businesses and even schools.

Windas hopes that the new single-stream recycling process, made available to the MCIA’s participating residential customers in 2015, will further scale up future rates.

For more information on the MCIA’s Recycling Division, call 800-488-6242 or visit www.mciauth.com.