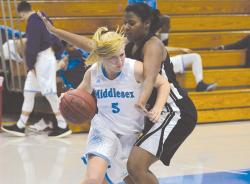 Middlesex County College’s Brittany Clayton, left, dribbles around the Community College of Philadelphia’s Saviare Gilliam during a recent game in Edison. The Middlesex women’s basketball team is having a great season. The women are 12-1 overall and in first place in the Garden State Athletic Conference and Region 19. SCOTT FRIEDMAN BISHOP AHR

However, after an embarrassing 65-37 loss to Greater Middlesex Conference (GMC) White Division foe Monroe Township High School in mid-January, Bishop Ahr decided enough was enough and went on a nine-game winning streak, taking 12 of their last 15 overall, to end with a respectable 18-7 record.

Kevin Harper, entering his 26th season as head coach, is hoping last year was just an aberration and that the return of six players who saw frequent action — three of which started — will enable the Trojans to contend for the division crown. Bishop Ahr was off to a 2-0 start before it met Union Catholic High School Dec. 28 in a holiday tournament and will resume regular-season action Jan. 2 when it hosts North Brunswick Township High School. 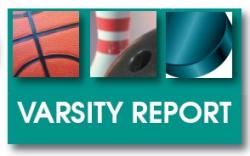 The Trojans have been led by senior guard Lauren Barlow, who wasted no time eclipsing the 1,000-point plateau for her career by scoring 24 points in a 72-64 season opening victory over Sayreville War Memorial High School Dec. 18. Barlow executes the offense as well as any court general in the GMC and will be a key to Bishop Ahr’s success.

That is not to say senior forward Jenna Harsh won’t make a major impact. Harsh stands 6 feet tall and is a force in the paint.

She is currently 200 points shy of 1,000 and should reach that mark this season. Junior guard Elle Cimilucca is the other returning starter. The rest of the roster includes senior Jillian Ramirez; juniors Sarina Rodriquez and Brianna Jackson; sophomores Virginia Lagdameo, Elyssa Jackson, Kelly Harmon and Sara Decker; and freshmanMorgan Maguire.

“We have high goals this season,” Harper said. “We should compete for the White Division title, but teams like [defending division champion] Monroe Township and Sayreville will be in the mix, too.”

Before the season began, Bishop Ahr boys basketball coach Dennis O’Keefe was uncertain as to the makeup of the starting lineup, which turned out to be a good thing. He used the pre-season to test different combinations and appears to have developed a rotation that is deep and talented.

The Trojans started the season 2-1 and could be a serious contender for the GMC Blue Division title if things continue to develop according to plan.

“We’re strong on defense, we can rebound and we’re intelligent,” O’Keefe said. “We know we’ll be going against quality teams in the division, so we need to keep developing.”

In addition to playing teams in the Blue Division twice, Bishop Ahr will go up against a number of non-conference opponents this season in order to be more prepared for the better teams the Trojans will face in the GMC and state tournaments. When the season resumes after the holiday break, Bishop Ahr visits North Brunswick Jan. 4, is home to Hackettstown High School Jan. 6 and Carteret High School Jan. 8.

The Edison High School girls’ basketball team is 0-3 early in the season, but don’t write off the Eagles just yet.

The three losses — to East Brunswick High School, Piscataway Township High School and Demarest High School — are against quality teams and may not be a true indication of Edison’s potential.

“We are young, athletic and play with a lot of heart,” first-year head coach Frank Eckert said. “Our greatest strength is our determination to succeed.”

If there is a liability, it’s the lack of scoring. In their three losses, the Eagles have failed to reach the 40-point mark. Freshman Samira Sargent is the leading scorer, averaging 12 points. The other members of the rotation are seniors Ashley Hunt and Tatiana Yourstone, junior Bianca Newsom and freshmen Daniella Marmol, Siuly Silva and Kernisha Chester.

Other members of the roster are juniors Idalise Mendez and Lauren Cassella, sophomore Victoria Giordano and freshman Lourdes Marasigan.

Edison’s chief challenge will be competing in the GMC Red Division, not only against Piscataway and East Brunswick, but also against other quality teams such as South Brunswick High School and Woodbridge High School.

“Being that we’re young, we are looking to improve in every aspect of the game,” Eckert said. “The goal is to play better day by day.”