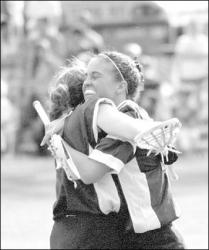 A small Group I school is not supposed to get wins like this. Playing for a conference crown, against a school much larger in size, the Shore Blue Devils were supposed to be the next victim in Jackson’s run to second-straight conference lacrosse title.

Except the gutsy Blue Devils had other plans.

The Shore Regional Blue Devils knew if they played their A game, they could beat anyone, and they proved just that Monday, shocking Jackson 12-9 for the Shore Conference tournament crown.

"After we beat Ocean, I told the girls we had a legitimate shot at Jackson, as long as we played our very best," said Shore head coach Chris Raichle. "We wanted Jackson from the beginning of the year. I thought we did a great job of being opportunistic. We got good penetration and made a few outstanding shots." 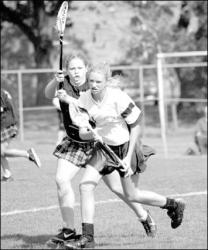 Chris Kelly Shore Regional’s Kristen Brady tries to work the ball up field against a Southern Regional attacker. The Blue Devils went on to defeat the Rams 7-5 in the quarter-final round of the Shore Conference Tournament.

Jackson’s coach, Lori Johnson, though admittedly disappointed with her team’s effort, was quick to praise the Shore team for their performance.

"You can’t take anything away from Shore Regional; they played an awesome game," she said. "They capitalized on our mistakes and made us pay. That’s what championship teams do. In a game like this, you can’t afford to make as many mistakes as we did. They took full advantage."

Both teams walked into the championship round, at Toms River North High School, owning flawless records, with the Jaguars’ slate at 18-0, and Shore 17-0.

In addition to being a Group IV school, Jackson had another advantage over Shore — they were the defending champions.

After a 6-6 deadlock at half-time, Shore initially blasted their way into an 8-6 lead, then again to a 10-8 edge following Lizbeth Balligan’s two second-half goals.

With 11:21 left to play, Shore had taken a decisive lead, and put Jackson in a position it hadn’t been in all season.

"We haven’t been in a situation like this all year," Johnson said. "I could see we weren’t real comfortable at that point, but I told the girls there was plenty of time left. I didn’t want them to lose confidence. We didn’t play well late in the game."

In the closing minutes of the game, the West Long Branch visitors rallied to outscore the tournament’s No. 1 seed, 2-1, securing a 12-9 victory.

Meg Villane scored two of her game-high six goals in the waning minutes to clinch Shore Regional’s crown. Other Blue Devil players to chip in with goals were Balligan and Melissa Lehman (two each), as well as Casey Whalen and Ashley Waldman (one each).

Not only did Shore offense outperform Jackson, their defense held the high-scoring Jags to only nine goals, a low total for the Shore’s top offense.

Not only did Brozena step up to halt Jackson’s winning ways, Kristen Brady denied the Shore area’s leading scorer, Katie Batiuk, to a mere one goal and two assists.

"[Kristen] Brady is a tremendous athlete," said Raichle. "She’s quick, she’s aggressive, and will do her best to shut down whoever we put her on."

"I’ve only started a few games this season," said Brady, "but I knew what Coach Raichle was asking of me. I was really excited. Coach was confident that I could do the job, so I wasn’t really nervous. I just wanted to play."

It was the Shore defense that also shined in the semifinal round of the tournament, when the Blue Devils knocked off Ocean Township 8-3, in what was the tournament’s first matchup of two undefeated teams.

The first half was a slow possession game, as both teams slowed down their run-and-gun offenses to patient, methodical attacks. Despite a slight edge in time of possession, Ocean was denied the few attempts they had at the goal.

Brady, Waldman, Amanda Arnold, Claire Goyette and Katie Murray crashed on cutters and closed open spaces, forcing the Spartans to circle the perimeter around the goal.

Shore’s encounter with Ocean was the first time Coach Raichle had Brady become the shadow for the opposing teams leading scorer. The junior held Heather George to a mere one goal.

Because of their defense and a stellar performance of midfielders Casey Whalen, Katelin Hampton and Melissa Lehman to move the ball up field, Shore would run the first half for a 3-0 lead. Lehman scored two first-half goals, with Balligan chipping in another for the leading effort.

Shore managed to step up their level of play in the second half, eventually outscoring Ocean 5-3, securing their 17th victory of the season. Villane would score her game-high three goals in the second half, as Waldman and Christina Bahrs both found a way to beat goalie Casey O’Brien.

Brozena only needed to make six big saves, as her team outshot their hosts 25-14.

Other than George, Ocean received a pair of goals from Caitlin Meseroll.

— Mike White contributed to this story