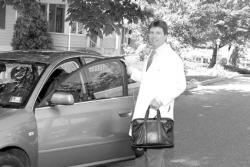 It is a scene reminiscent of a Norman Rockwell painting: a doctor toting a black bag knocks at the front door of a patient’s home, while on the other side a frail grandmother waits for his visit.

But the house call vignette isn’t a nostalgic look back in time — it’s happening today with increasing frequency at the homes of elderly, chronically ill patients.

In 1996, Salisbury used his car as an office and started his house-call practice with three patients. By the end of the first year, he was seeing 20 a week, a trend that would continue.

Launched as a solo practice, Visiting Physician Services now has a staff of four doctors and 10 clinicians including several nurse practitioners and physicians’ assistants who serve patients in Monmouth, Ocean, Middlesex, Union and Essex counties.

According to Alex Binder, chief operating officer, Visiting Physician Services has doubled in size in the past two years and has expanded into an additional county in each of the previous three years.

And demand for medical care for homebound elderly is expected to continue to grow. "There are more than 200,000 people over age 65 in Monmouth and Ocean counties and an estimated 10 percent are homebound," Salisbury explained. "They can’t get in a car and get to the doctor."

"We fit a niche," noted Binder. "The profile of our average patient is an 82-year-old with multiple, chronic illnesses, who has Medicare, is not working and is at home."

According to the American Academy of Home Care Physicians, there are currently more than 34 million older adults in the United States, and that number is expected to double in the next two decades. By that time, the AAHCP Web site says, the number of homebound, chronically ill elderly patients is expected to reach 2 million.

After a year, he decided to start his own house-call practice, relying at first on referrals from the Visiting Nurse Association of Central New Jersey, Red Bank.

"I decided to take a leap of faith and see if I could make a living at it. I took all my own phone calls, did all my own billing. I was running the practice out of my car," explained the Leonardo resident. "The first week I had three patients. By the end of the first year, I was probably seeing 20 patients a week. By the second year, I was still working alone and it was not unusual for me to see 50-60 patients per week. I was probably working 12 hours a day."

While he expected his practice would serve pediatric patients and people with limited time to get to the doctor, Salisbury found this sector accounted for only a small part of his practice and that he was, in fact, primarily treating elderly patients with chronic illnesses like stroke, hypertension and diabetes.

What he found was that 20 percent of his elderly patients hadn’t seen a physician in two to three years because they couldn’t get to the doctor’s office.

"It was pretty clear there was a very significant percentage of the elderly population receiving no medical care at all," he said. "None. So there was a need for these people to get routine, preventive care. It’s tragic, really."

"Typically we get called when the cases are critical," explained Binder. "In many cases, when we get in there, it’s more acute."

"Because nobody is doing more than a five-minute exam," added Salisbury. "We’re trying to focus on early care and preventive management."

According to Salisbury, not only do house calls make medical care accessible to an underserved population, but the level of care delivered by the visiting physicians and support staff is superior to that available in a traditional, office-based practice.

While a doctor in a traditional practice may see up to 40 patients a day, the house-call docs see far fewer, he noted.

"You can’t see more than seven to eight patients a day and do it right," said Salisbury, adding that visits typically involve more than the delivery of medical care.

"The doctors tend to drive a lot," said Salisbury, who covers about 100 miles per day.

Most patients are Medicare recipients and the practice accepts the fees set by Medicare for services.

But the number of other patients who use the practice is limited by the fact that most health insurance companies do not cover house calls, and those patients pay an out-of-pocket fee for visits.

Fees run from $60-$120 per visit, depending on the length of time of the visit and the complexity of treatment needed. Visits can run from 15 minutes to 1 1/2 hours, he said.

"The initial visit is a full physical and social assessment," explained Salisbury, noting that the visiting doctors and assistants are able to draw blood for blood tests, perform electrocardiograms and arrange for in-home X-rays.

"I go in and take a full medical history, do a full medical exam, assess living conditions, monitor their nutritional status including looking in the refrigerator, review all medicines, assess for safety issues, and look at psycho-social issues," he explained.

In addition physicians determine if patients need help from other social agencies and care providers and make those referrals including arranging for visits from audiologists, optometrists, even referrals for legal services such as estate planning and guardianships.

"We’ll get involved as much as someone wants us to be. Because we have familiarity with this population, we’re a resource for them," said Binder. "In many cases, we believe, we act as a surrogate family for some of these people."

"It’s amazing what we do," concurred Salisbury. "I’m working right now with a patient who wants a companion dog, and I picked up a blender for a patient who can only eat pureed foods."

According to the AAHCP, physicians who make house calls deliver a broader range of care in the home and manage patients whose needs are complex at a cost that is lower than emergency room visits, ambulance transport and hospital stays, while reducing the need for nursing home or assisted living care.

While the house-call practice doesn’t allow for hospital privileges, for those times when a patient needs to be admitted, Visiting Physician Service has relationships with doctors at specific hospitals who will assume care of the patient.

But, Salisbury noted, the care delivered by visiting doctors is such that the need for hospital stays is averted in most cases.

"We’re so good at it, out of 1,000 patients less than five patients go to the hospital each month, " he said.

"The outcomes are better in terms of the health of a patient and the satisfaction," Binder added.

According to Binder, physicians in house-call practices earn about as much — $140,000 — as the traditional, office-based practitioner,

"It’s a different cost structure than a traditional office practice," explained the Wall resident. "There are more variable expenses associated with what we do, and as the variables increase, the cost goes up."

Future plans for Visiting Physician Services call for extending the practice to Somerset and Bergen counties, and Binder said discussions are ongoing with hospitals about the role visiting physicians might play in helping to contain costs for care of patients who don’t have primary-care physicians.

The house-call practice, according to Salisbury, gives doctors back the old-fashioned satisfaction they used to derive from the practice of medicine.

"Family physicians view this as what being a physician is really about," he said. "It’s about being a doctor in the way that doctors used to be. Plus, there’s a certain independence to it. You’re not tied to an HMO; you’re doing your own practice again without some of the constraints HMOs put on you. You can actually treat the patient without sending them to a lab."