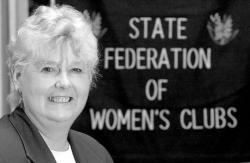 VERONICA YANKOWSKI Morganville resident Ann Quinn, current president of the N.J. State Federation of Women’s Clubs, is committed to the club’s ideals of literacy and education.

Community improvement through volunteer service is not just a slogan to Ann Quinn, president of the New Jersey State Federation of Women’s Clubs. It’s a reciprocal relationship that she finds satisfaction in as she works toward helping her community and the clubs in general. All of the Woman’s Clubs that she has personally been involved with have nurtured her growth, and she has given back in kind.

Quinn has been involved with the women’s service organization since moving to the Matawan area from Europe, via Canada, in 1968. She currently serves as the NJSFWC’s 48th president and has served on the board of directors and as chairwoman of several departments, as well as district vice president, third, second and first vice president.

Born in South Wales, she taught school in England for a time and began teaching again when she moved to Matawan with her husband, Tony. She taught at the Thorne Junior High School in Middletown until her first son was born. At that time, in 1972, she stopped teaching and joined the Matawan Junior Woman’s Club.

The rest of Quinn’s professional history represents what the NJSFWC stands for: empowering women. Quinn rose up through the ranks to become state president of New Jersey’s oldest and largest volunteer service organization for women. 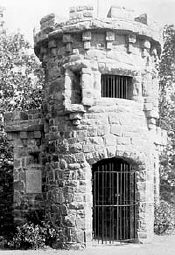 The commissioners of the Palisades Interstate Park and the N.J. State Federation of Women’s Clubs dedicated this memorial watchtower in Alpine on April 30, 1929.

According to Quinn, the Matawan Junior Woman’s Club was a very enthusiastic group. "They were working with a Head Start program. This appealed to me, so when I was asked to join, I did.

"Eventually, I started a newspaper recycling program in Matawan/Aberdeen. This was before mandatory recycling. It lasted for 11 years, and we raised well over $30,000, all of which went back into the community."

Quinn is the second member from the Woman’s Club of Matawan to serve as director of Junior Clubs and as state president. The first was Geraldine Brown Sentell of Keyport. Sentell, also a teacher as well as editor of the Matawan Journal and Keyport Weekly, served as director from 1950-53 and president from 1966-68.

Now a resident of the Morganville section of Marlboro, Quinn is a Realtor for Prudential New Jersey Properties in Matawan.

According to Joan Vastbiner of the Freehold Township Woman’s Club, Quinn combines organizational skills, a gracious personality and a charming English accent. "I feel we are very fortunate to have her as state president," she said.

The General Federation of Women’s Clubs (GFWC) was founded in 1890 (and currently has members in 6,500 clubs around the United States and more than 1 million members worldwide); the state federation was founded in 1894 when approximately 150 women representing 36 clubs met in Union Hall in Orange. Since 1959, it has been headquartered in New Brunswick on the corner of Douglass campus. There are currently 14,000 members in 309 clubs. Clubs meet either during the day or in the evening, depending on members’ needs.

According to Quinn, although the Woman’s Club of Freehold recently closed after 94 years, the organization is still going strong. "We have lost clubs, but the clubs that manage to keep a range of ages are our most successful clubs," she said.

Many members believe that it is that flexibility that has allowed GFWC to grow and adapt to the changing and diverse lifestyles and concerns of women throughout more than a century of volunteer work.

According to Quinn, one of the biggest changes over the years is the need for nighttime meetings. "When women began to enter to the work force in great numbers," she explained, "we had to adapt in order to fit in with the membership. Many clubs meet at night to accommodate working women, but the focus is still the same — literacy and education."

The General Federation’s accomplishments are too numerous to itemize, and many have had a tremendous impact on society as a whole. They include turning the tide for the passage of the Pure Food and Drug Act (the early-20th-century movement was led by Alice Lakey of Cranford) and the founding of kindergartens and 75 percent of libraries across the country, Quinn explained.

The General Federation was also an important force in founding America’s first national parks. Most recently, in 2002, the General Federation fulfilled a promise, made at the President’s Summit for America’s Future, of raising more than $13 million in books and materials to benefit the nation’s public libraries. Quinn said GFWC members are currently working to contribute $2 million in books and materials to elementary school libraries.

As part of this program, Quinn said the NJSFWC has agreed to assist with the Governor’s Book Club initiative. Clubs will be adopting a local kindergarten to third-grade class and will help by reading the book of the month, making tapes and donating books.

According to Quinn, the General Federation level promised to provide $12.5 million for public libraries for books and material. "They actually provided $13 million," she noted. "This year, member clubs are being asked to provide $2 million to school libraries."

Some of the clubs are also working on the Highlands project in northwestern New Jersey, Quinn said. "We’ve been working to get legislators to pass the federal Highlands Stewardship Act. It’s important because the area is the Upper Delaware River Watershed and provides water for 11 million New Jersey and New York residents. It says in the description of the act that 14 million people visit this landscape of national significance each year."

Quinn explained that according to a U.S. Forest Service study, 5,000 acres a year in the New Jersey/New York Highlands are being lost to development.

"A whole coalition is working together to preserve this land," she said. "If we lose this pristine land, it will be a major loss."

Quinn noted that in July the U.S. Senate Appropriations Committee approved a bill to fund the Department of the Interior and related agencies with money to help preserve parts of the state’s most sensitive environmental regions, the Pinelands and the Highlands. It includes $5.5 million for land acquisition on the Upper Delaware River Watershed.

Quinn knows that women working together can accomplish important things. "One hundred years ago, it was the NJFWC that saved the Palisades Cliffs. They were being blasted by quarry men for stone. We are using the same approach now, letter-writing campaigns and articles," she said, adding, "That and founding Douglass College are two of our proudest accomplishments of the past."

In addition to nationwide and local projects, every two years they choose a statewide project. This year, it’s Canine Compan-ions for Indepen-dence (CCI).

"We’re looking for puppy raisers," Quinn said. "Puppy raisers have the dogs for about 18 months. By the time the dogs are given to a disabled person, they have been educated to go everywhere."

Quinn said that in May, NJFSWC turned over $70,000 for refurbishing the new CCI facility in Medford, N.Y.

She is justifiably proud of the organization she has been a part of almost since she arrived in this country.

"There are so many benefits to becoming part of a Woman’s Club," she said. "Besides projects that benefit the community, there is the potential for developing friendships with other women and the potential for growth and learning.

"You get to understand local administrations because you participate in things that affect your communities. Whatever time a person has can be used. For instance, if you are interested in doing something with libraries, or with children, or on a computer, we need you. Whatever you are interested in, you can find something that appeals to your interests."

Ann Quinn said, "It all started because women didn’t have access to education. Woman’s Clubs were the springboard for social change."