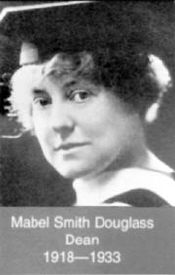 Mabel Smith Douglass (1877-1933) was president of the Woman’s Club in Jersey City when she began lobbying and raising funds to establish a women’s college. So it is not surprising that, as the founding mother of Douglass College, she is revered by Federation members everywhere.

According to New Jersey State Federation of Women’s Clubs (NJSFWC) history, on May 17, 1912, at a district meeting Douglass was prevailed upon to chair a committee to work toward the founding of a college for women.

The stress of three years of campaigning for money, approval and support, coupled with her own poor health and personal tragedies, circumscribed Douglass’ participation over the next three years. So the Federation stepped in and issued a challenge to the federated women to cease whatever other club activity they might be engaged in and turn all their efforts toward carrying on the work started by Douglass.

The women rose to the challenge and at the 1915 convention adopted the issue with the slogan "Wanted: A State College for Women." The necessary funds were laboriously raised, and the New Jersey College for Women, adjacent to the Rutgers campus in New Brunswick, opened in September 1918, with a class of 54 and with Douglass as the first dean.

"From the beginning, it was a true college for women, offering a traditional liberal arts program. Now it is the largest women’s college in the nation," said Ann Quinn, president of the state federation.

Appropriations were finally allocated from the state Legislature for the operation of the college a year after it opened, and in 1956 the name was changed to Douglass College as a tribute to Dean Douglass.

The Federation continued to support the college. Club women raised $25,000 to build a science hall, which was dedicated in June 1922. Their next gift, on the 10th anniversary of the college, was $100,000 for a music studio. Another project, building a student center, was completed during the 1953-56 administration, and within the next six years assisted by the Evening Membership Department and Education Department, a fireplace and furnishings for a library study center were realized.

"The realization of Douglass College, and the importance of our role in its inception, is one of the proudest achievements of the New Jersey State Federation of Women’s Clubs," Quinn said.

Her office is in the state federation’s headquarters at 55 Labor Center Way on a corner of the Douglass campus. The Federation headquarters was built with the money from the sale of S&H Green Stamps. It opened May 1, 1966.

"Three-fourths of the money came from women who sold the Green Stamps that were popular at the time. I think each book was the equivalent of about $2," Quinn said.

Their support of the college continues. In 1972, the clubs contributed $100,000 to the arts center, and between 1978-80, the clubs raised $126,000 for the Douglass Developmental Disability Center to provide education for autistic children, while offering practical field work to 100 college students annually.

From the beginning club members have supported the Federation scholarships given annually to Douglass students.

Some scholarships have changed over the years to keep up to date. They are currently fine arts; performing arts; journalism/English; science, applied and natural; international exchange; political science; as well as a Girls Career Institute Scholarship for a past attendee. Federation scholarships are based on need and future promise, and include a continuing education scholarship for a returning mature woman. The recipients are chosen by Douglass.

In 1999 a new scholarship was added, the Volunteers of Tomorrow Education Fund for a student volunteer.

NJSFWC co-sponsors College Day with Douglass annually. It began in the 1930s for high school juniors to spend a day on the Douglass Campus, tour the facility and become acquainted with the curriculum.

A Girls Career Institute (begun in 1947) is held annually at Douglass. Young women completing their junior year are sponsored by clubs around the state. The institute offers a taste of college life by offering delegates the chance to live in the dorms. They have the opportunity to hear well-known speakers and participate in workshops. Federation members act as house mothers.

Women of Achievement is co-sponsored by NJSFWC and Douglass to recognize outstanding women in various fields in New Jersey. Begun in 1982, it was first held in conjunction with College Day but is now held in different locations to highlight a Federation scholarship. In April it was held at Drumthwacket, the governor’s official residence in Princeton, with the proceeds going to the Federation Political Science Scholarship; $3,000 was presented to Douglass Dean Carmen Twillie Ambar at the NJSFWC convention.

Each year the dean of Douglass attends the Evening Banquet, which honors club presidents at the annual convention in Atlantic City, to update the Federation on the happenings at the college.

The founding of the Women’s College of New Jersey was in keeping with the original idea of the women’s clubs: education. "What they did was amazing," Quinn said.