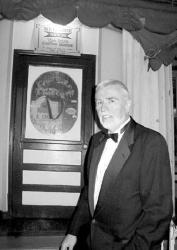 His last night as proprietor of the Dublin House in Red Bank was, predictably, a roller-coaster ride for Kevin Lynn.

"I kind of have mixed emotions, somewhere between ecstatic and just plain crazy," he admitted. "The down side will come later. Right now, it’s just another opportunity to have a party."

And party they did. Patrons and friends packed The Dublin House last week to give Lynn a proper send-off after 23 years as the proprietor of Red Bank’s quintessential Irish pub.

"This isn’t for me, it’s for the staff," he said of the going-away party. 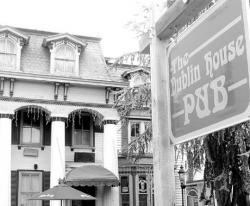 An exterior view of The Dublin House in Red Bank.

Just a day earlier, Lynn had closed on the sale of the pub to Eugene Devlin and Sean Dunne, two sons of Erin who pledge to keep the pub’s authentic Irish roots and invest about $1 million in renovating the circa-1835 structure.

In a quiet moment before the festivities began last week, Lynn reviewed his run.

"There’ve been high points, too many to mention," he said. "This has been a wonderful ride, with peaks and valleys and, every now and then, a change of direction.

"I came into town in 1981 when you could throw a can down Broad Street and nobody would hear it," he reminisced. "I was on the west side when nobody would come there and I watched the town evolve."

Lynn moved his Irish pub to 30 Monmouth St. in the Victorian Courtyard 14 years ago. Prior to that time, he operated the Dubliner Pub on Bridge Avenue near the Red Bank train station.

A high school literature teacher for 27 years, Lynn nurtured the development of the Dublin House into "a truly literary pub," where patrons could also quench a thirst for Irish culture in the form of poetry readings, book signings, storytelling and live performances of traditional Irish music by local lads or renowned musicians like the Chieftains and Irish Rovers.

Twenty-three years of tending Irish pubs have provided Lynn with plenty of fodder, and he plans to write a book of bar stories.

"I’ve been collecting them," he said, and agreed to share one of his favorites.

It seems a customer at the old Dubliner Pub ran out on his check and was pursued by a barmaid named Mitzi, Lynn recalled. With cleaver in hand, she caught up with the man as he tried to cross the railroad tracks and tackled him on the spot. Lynn chuckled as he recalled the chase.

He can also recount episodes that revealed the true mettle of pub denizens.

"There was a fire at the old place [the Dubliner Pub] and everybody ran out, leaving me with 22 open tabs," he recounted. "And 19 came back the next day and paid them."

After 27 years as a teacher in the Middletown school system and 23 years as a pub owner, the Fair Haven resident said he will see how retirement suits him.

"I’m a blessed man for all the great people I’ve met through the years," said Lynn. "But I’m going to have a little trouble finding a place where I can eat and drink for free."

The Dublin House and the historic structure which houses the pub now are owned by D & D Corp., the partnership of Devlin, a Belfast native, and Dunne, a native of County Monaghan.

The impending sale of The Dublin House became public last July, touching off months of speculation about its future and the partners tried to put concerns to rest this week.

"It’s going to remain an authentic Irish pub and plans are to retain the staff now in place," Dunne said. "The character of the place is going to remain the same. It just needs a physical upgrade."

"We have big plans for the place, but it all will be done in phases. You won’t see a drastic change overnight," said Dunne, proprietor of Dunne’s Pub in White Plains, N.Y.

Renovations will take place over a period of years he said, and plans are to keep The Dublin House open through the construction.

Dunne debunked a rumor that Dublin House would be reincarnated as a flagship Guinness pub. It will not, but there will be Guinness stout on tap, he hastened to add.

Nor will it become an upscale watering hole.

"It’s not going to be an upscale place," assured Dunne. "We will upgrade it, but there is absolutely no way it’s going upscale. We would like to cater to all types and classes of people."

Major changes are planned inside and out, and one of the first will be installing "a nice mahogany bar," Devlin said.

Extensive renovations will include new bathrooms on the first floor, revamping the second-floor dining room, restoring the fireplaces, installing the new mahogany bar. Improvements to the exterior will include new siding, replacing windows, relocating the entrance and adding a portico, and enclosing the open deck area at the rear.

Design work that will transform the time-worn Dublin House into a handsome, traditional Irish pub is being handled by Dublin architectural firm O’Donnell O’Neill and overseen locally by Ned Gaunt of Kaplan Gaunt DeSantis, Red Bank.

Structural renovations will begin immediately to the 169-year-old building that is in need of extensive renovations.

According to the Red Bank Historic Preservation Commission, the three-story building known as the Allen House was constructed between 1835-60. The residence of former Red Bank Mayor Robert Allen Jr. was originally located on Broad Street, opposite Mechanic Street, and was moved twice away from the expanding commercial center of the downtown.

The building was converted to commercial use in 1971 and had been owned by The Ten Co. for 20 years.

Dunne came to the United States for the summer of 1974 while a student at University College, Dublin, and stayed.

"I fell so much in love with the place that I never went back," he said.

He met Devlin in New York al­most 30 years ago, and the two ex­patriates have been friends ever since.

Devlin, like Dunne, came to the United States for a visit in 1978, and remained, He is a partner in St. Becket’s and Waterstone Grill, Irish restaurants in New York’s financial district.

He plans to relocate to Red Bank and work full time at The Dublin House, where plans made were for a traditional Irish St. Paddy’s Day celebration this week.

The new owners plan to place a heavy emphasis on the restaurant component of the pub, explained Devlin. New York chef Conner Powell, a native of Warren Point in Northern Ireland, will be brought in to head the kitchen and redo the menu.

Through the restoration, The Dublin House will be reborn but will remain an authentic Irish pub with a vibrant literary tradition and its Irish heart intact.

"It will be an authentic Irish pub — cozy, warm, intimate," De­vlin promised, adding that it will be one possessing an attribute essential to any good Irish pub.

"Why, it’s the people who run it," Devlin explained. "The two brogues at the top.

"Tell them not to worry," he added, "because it’s always going to be The Dublin House."