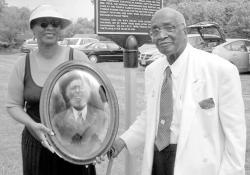 CHRIS GAETANO Thomas Jennings, the great-great-grandson of Thomas Titus, stands with niece Frances Moore holding a picture of the son of Titus, a freed slave whose work was recognized at the June 16 dedication ceremony. SOUTH BRUNSWICK – James Shackleford knows where the bodies are buried. He’d like other people to know too.

On June 16, Shackleford, before an audience of about two dozen, unveiled a marker dedicating the land where, nearly 200 years ago, a freed slave named Thomas Titus lived, worked and eventually died. The marker, about 6 feet tall and made of bronze, represents years of work and effort on the part of Shackleford, a South Brunswick resident, to honor the memory of the man and his 11-acre Kendall Park farm, located off Benson Road.

“I think it’s great because I get to put a historic stamp on a piece of property in the township, and people don’t often get to do that, and I think it validates my work,” said Shackleford.

The dedication, held during a hot and humid afternoon, featured presentations by township and county officials, educators, historians and performers.

Also present was the great, great grandson of the original Thomas Titus, Thomas Jennings, who told the audience about the further history of the Titus family. Jennings, 91, currently a New Brunswick resident, was the man who showed Shackleford exactly where his ancestor was buried.

He said that many along the Titus line had died of cholera in the 19th century, noting that it was a common condition in those days. As he spoke more, he reflected on the everyday stories that end up getting lost in the shuffle amid the Great Wars, Great Depressions and Apollo missions of American history.

Shackleford’s research shows some of the nitty-gritty things that Titus did. The man spent time growing oats, wheat and hay. He took care of the livestock, which dotted the small landscape. He raised a family with his wife Sarah, with whom he fathered 12 children. With them, he lived quietly and eventually died of the plague at 64.

Jennings had shown Shackleford the location of Titus’ body at the north end of the farm, near a standing row of trees. The grave site once had a thick, engraved headstone, a rarity for a former slave. The stone currently sits in the public works building, cracked in half by vandals long, long ago. Time and the elements eroded some of the writings on the stone, but much of it is still fairly legible.

Commission, the body that awarded the marker, agreed that local history often goes completely ignored, as people live in a single place for perhaps years without knowing about anything that had happened there. She said the Titus farm was selected for a marker, the third one in the county given out, not only because of its importance to local history but also for illuminating another aspect of the American story.

“It also speaks to the slavery issue, which most people, when African-American history is mentioned, do think of slavery, but slavery as a Southern issue. [They think] it happened in the South, it didn’t happen here, when in truth, it did happen here, so this makes this very important,” Aschkenes said.

Slavery has been a part of New Jersey since the 1660s, when the Dutch began to import slaves from the West Indies. People looking to buy would usually go to Perth Amboy, then a thriving port town popular among slave traders at the time. By the time New Jersey became the last northern state to abolish what had been called the “peculiar institution” in 1804, there were about 12,000 slaves. Shackleford’s research led him to believe that the institution’s practice in this state was different than the vast plantations in the South.

“It wasn’t just like the plantations in the South, they didn’t have 25 slaves working the land. Most were just middle-class people trying to make it and they had two, three slaves, and if they were lucky, they had some children and got a few more,” said Shackleford.

Titus had firsthand experience with both the institution of slavery in New Jersey as well as its end. He started as a slave to Gerardus Beekman, a prominent landowner in South Brunswick for whom the road off Route 1 is named for. In 1814, he was freed in Beekman’s will and two years later he and his wife bought a 2.5-acre farm for $50 from the Van Dykes, another land-owning family that employed slave labor on their farm. The former Van Dyke farm is currently the subject of a conflict between South Brunswick, which is seeking to preserve the land, and a developer that wants to build luxury housing on it.

Over the years, more and more land was purchased by his family until, eventually, the plot stretched for 11 acres. Alan Hooper, the grandson of Titus, sold the land in 1870 to a descendent of the family that had originally owned his grandfather, where it went through a long series of owners before the township, specifically the parks department, came to acquire it in 1989.

Shackleford’s interest in the site, and in historic grave sites in general, began around 2001, and since then, he has devoted much of his free time to his research. Since beginning, he has given lectures and presentations across the state for various events and organizations, all the while increasing his knowledge of local slave history. Shackleford said that since he began revealing what he had learned from others, he has been met with skepticism from various people, causing him to lay out extensive documentation when making public presentations.

“People were never taught, especially in school, that slavery existed in New Jersey. … If you guys did one of those polls you do and stood outside a diner and asked people, ‘What do you know about slavery in New Jersey?,’ most would say there was no slavery in New Jersey. People don’t believe it, so I always felt I needed to validate it with a little more proof than if I was, say, talking about the farming in New Jersey,” Shackleford said.

Since becoming interested in local history, his family has taken his new hobby in stride.

“It’s always unbelievable that he’s so entranced by this. He kind of woke up one day and James is loving cemeteries,” said Vida Hezekiah, a Kendall Park resident and Shackleford’s mother-in-law. “He really, truly, lives and eats and loves what he’s doing.”

Noting that almost every prominent land-owning family in South Brunswick history had slaves, he has taken a particular interest in the local history of slavery, leading to his campaign for the county to recognize the historic significance of the Titus farm.

Vindication came during a Middlesex County Freeholders meeting in December last year, but the farm itself met with misfortune about a month later as one of the barns, about a century old, caught fire and burned completely to the ground. Shackleford, devastated by the loss of the structure as well as many of the items inside, still moved on. About four months later, South Brunswick police said that the fire was most likely caused by youths who had broken in, started a fire and left after believing they had put it out.

After the presentation, as attendees mixed and mingled, Shackleford looked out at the now empty field, a patch of grass slightly lighter than the rest standing as proof that, at one time, there had been a building there. Without the marker planted where once there was wheat, few would know what used to occupy that space, especially now. Shackleford said he wouldn’t mind if the land were designated for local public use as a park, noting that people already come up the way to walk their dogs.

Satisfied with the memorial, he is already thinking of his next project.

“I think the next project I’m really trying to figure out, I’m working over on the corner of Raymond Road and [Route] 27, the Higgins family cemetery over there. In the back of that cemetery, close to the road, about 800 feet back, there’s three people buried there with just first names, which I assume were servants of the house. I’m trying to figure out who they were,” said Shackleford.