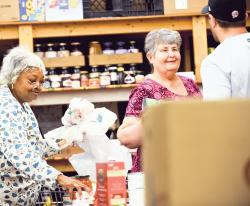 Volunteer Joanna Parks (l) and Sandy Taylor, vice president of the board of trustees of Open Door for 25 years, separate food items at the Freehold Area Open Door food pantry in Freehold Borough. The food pantry, now in its third decade, continues to meet the needs of area residents. JEFF GRANIT staff The agency that has been feeding people in need in the Freehold area has reached its 25th year of service to the community.

Freehold Open Door Inc., Throckmorton Street, Freehold Borough, was incorporated on April 14, 1987, under the leadership of the Freehold Clergy Association. The nonprofit interfaith agency is administered by a 17-member volunteer board of trustees, two part-time salaried employees and more than 150 volunteers.

The agency currently serves an average of 400 households each month, according to Jeanne Yaecker, who has been the director of operations of the food pantry since 1994, when about 200 area families were receiving food each month.

When Yaecker started with Open Door, she brought something valuable that was not in place before she arrived — the ability to do grant writing.

“We also have other agencies who routinely support us very generously,” Yaecker said, adding that the total operating expenses for the food pantry are $140,000 per year. Of that amount, $104,000 comes from grants.

One change that has occurred over the past 25 years is that people who once donated food are now on the receiving end of the process.

“They are losing their jobs, their homes, their medical benefits. These people were once our supporters and feel embarrassed because now they are on the receiving end,” Yaecker said.

Freehold Area Open Door also operates an after-school program at St. Peter’s Episcopal Church, Throckmorton Street, Freehold Borough, where children receive help with homework, have use of computers, and work on arts and crafts projects, according to Yaecker.

“It has been a great privilege to work with such wonderful volunteers, such wonderful clients and such wonderful donors,” Yaecker said. “I look forward to working here every morning. Although it’s not the happiest of environments, it makes you feel good knowing you have done something to help. My aim is to have us do the very best job we can do, and I think we are succeeding quite well.”

Yaecker said she could not do the job without the support of the community.

Longtime volunteers Sandy Taylor and Joanna Parks, both of Freehold Borough, have been a part of that community support system. Taylor has been a member of Freehold Area Open Door’s board of trustees since 1988, and she is still volunteering at the food pantry.

“If you are going to do something, you might as well do it all the way,” she said.

Taylor said certain clients over the years have made a significant impression on her, such as a man who was so apologetic for having to accept food from the pantry that he cleaned the bathrooms as a thank you to the staff, and a woman who also apologized for accepting groceries and then donated food to the pantry when she got back on her feet .

She also recalled a man who was on his way to Maine with his family years ago.

“His car broke down and after the repairs, he had no money left to feed his family on their trip,” Taylor said. “We gave him food for his family. It was so nice to be able to help him and he was so incredibly grateful for our help.”

Parks began working as a volunteer 20 years ago. She volunteers three days a week from 9 a.m. to noon and gets the food ready for clients. Parks said she enjoys helping people in need.

The Borough Council honored Freehold Area Open Door with a resolution at the May 7 council meeting. The resolution commends the organization for 25 years of service in Freehold Borough.

Freehold Area Open Door volunteers were instrumental in starting the Western Monmouth Habitat for Humanity affiliate in 1989. The program has built 25 affordable homes in Freehold since its inception and is hoping to build four new homes in the next two years, according to the council’s resolution.