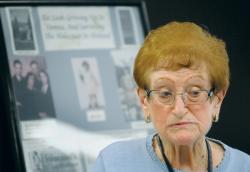 The students have been learning about the Holocaust in class and reading books about the time period, such as “The Diary of Anne Frank” and “Number the Stars.” Fifth-grade teacher Adele Goldenberg, a daughter of a survivor, who organized an afternoon visit from the survivors on May 23, said many of the students had not heard about the Holocaust before reading about it in school this year.

“New Jersey has required that the fifthgrade students participate in Holocaust education, and I wanted to help enhance their learning by bringing in survivors who could give firsthand accounts of their experiences to make it more realistic for the children,” Goldenberg said.

Ilsa Loeb tells her story to students in Adele Goldenberg’s fifth-grade class. PHOTOS BY ERIC SUCAR staff Monroe resident Ilse Loeb, originally from Vienna, Austria, compared her story to that of Anne Frank, the young girl who, in her diary, documented the two years her family spent in hiding from the Nazis. At the age of 13, Loeb was separated from her parents and went into hiding in the home of a Christian family until the end of World War II. She never saw them again.

“We fabricated new identities at a very young age, sacrificing our childhoods,” she told the students. “We could never cry — only at night into our pillows.”

Loeb considered herself an “innocent victim” of a world gone mad. At the start of the war, there were 1.6 million Jewish children living in Nazi-occupied Europe, but by 1945, only 100,000 remained. 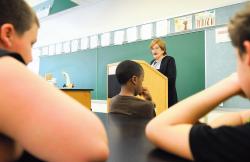 Devorah Hilsenrath, who is originally from Hungary, tells students about the conditions at the Auschwitz concentration camp. Fellow innocent victim and speaker Devorah Hilsenrath, originally from Hungary, told a similarly harrowing story to a separate class of students. Hilsenrath, a Highland Park resident, survived the terrible conditions at the Auschwitz concentration camp, only escaping death by making a run for an air-raid shelter with her cousin toward the end of the war. Soon after their brave attempt to attain freedom, the Russian army liberated the war prisoners in the area.

“We escaped from death to life, from slavery to freedom,” she said.

Sadly, she and her cousin returned home to discover they were the only members of her immediately family to survive. Hilsenrath lost her parents, grandparents, brother and sister.

“After a year, we realized nobody survived,” she said. “Our only sin was we were Jewish.”

A third speaker, Farah Kraus, told her grandmother Eva Kostre’s story of life in concentration camps in Auschwitz and Ravensbruck. The Nazis were transporting Kostre’s group to the Baltic Sea to drown them when they were liberated by the Russian army.

Despite her distressing ordeal, Kraus’ grandmother recited poems, sang songs and performed shows to cheer up everyone in her Red Cross displaced persons camp. Kostre’s motto was, “Every day is a holiday.” Kraus said her grandmother did not like to live in the past, but also did not want to forget her experiences.

Loeb also emphasized the importance of remembering what happened during the Holocaust.

“I am making you all witnesses, so when you get older and hear anyone say, ‘[the Holocaust] didn’t happen,’ you will have to speak up for the survivors who aren’t here anymore,” she told the class.

Loeb tried to instill a lesson of tolerance to the children, blaming hate and ignorance for the events of the war. She does not believe people have properly learned this lesson yet.

“Nobody is born with hatred. You have to learn it,” she said. “Hatred is a terrible thing, and it only destroys. There is still so much hatred in theworld. If I can get through to one of you, I have done my job.”

Goldenberg said she hopes to bring survivors such as these women to the school in the future because the children learned a great deal from them.

“The students learned that we must be tolerant and understanding of others,” she said. “It is very important for the children to understand the events leading up to and including the Holocaust in the hopes of preventing an atrocity such as this from happening again.”