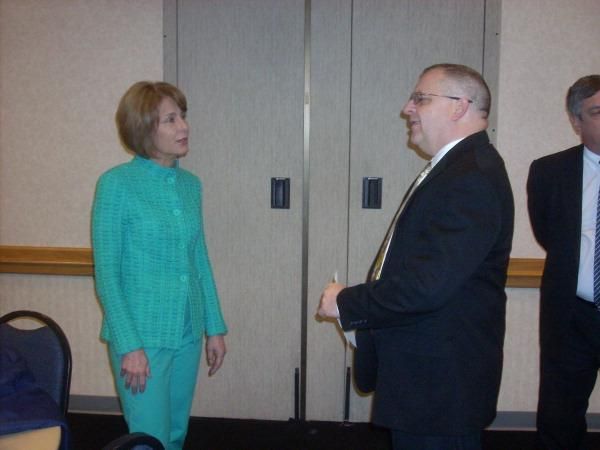 By Gene Robbins, Managing Editor
Flood solutions big and small were addressed at a conference Saturday on flooding of the Raritan and Millstone rivers.
Towns along the two rivers — particularly Manville at the confluence — have been battered in the last 13 years by two hurricane-force storms, said Frank Jurewicz, chairman of the Raritan-Millstone Flood Commission, which sponsored the event at Raritan Valley Community College.
”We cannot wait 30 years for help,” said Mr., Jurewicz, referring to the pace of the nearby Green Brook project that ultimately resulted in flood walls along the Raritan River to protect Bound Brook.
The commission is focusing its political efforts on trying to pry about $3 million from state and federal governments to complete an Army Corps of Engineers study of alternatives to reduce or mitigate flood damage.
The study currently is exploring alternatives like channel dredging, removing weirs from rivers and levees and walls — or no action if the cost-benefit ratio cannot justify it, he said. At the same time, there were educational and short-term, comparatively small, things the commission could pursue, said David Gentile, project manager for the Corps.
The conference was a culmination of work by the year-old commission of nine municipalities and Somerset County.
”Our hope is that, in five or 10 years, when people see improvement, they can look back on this point in time,” Mr. Jurewicz said.
As for action in the near term, the audience of 50 or more people heard about green infrastructure, Blue Acres buyouts and clearing potentially clogging flood debris from the rivers.
David Robinson, a Rutgers University professor, who is the state climatologist, showed graphs and data that detailed how flooding has become more common in recent years.
The Hillsborough Township resident said three of the top 10 all-time floods of the Raritan River at Manville have occurred in the last decade, he said.
Temperatures will keep rising, precipitation will stay steady or increase, and there will be more energy in weather systems, he said.
”We just don’t know when and how strongly storms will hit,” he said.
Jim Waltman of the Stony Brook-Millstone Watershed Association said municipalities have the power to enact stronger land-use regulations than go beyond state statues. For instance, Cranbury and Hopewell Township have passed farther setbacks from streams and flood plains, he said. Hightstown now reviews development plans with anything more than 250 feet of new impervious surface, he said.
Most of the persistent flooding areas were built up before there were stormwater ordinances, he said.
”To reduce the problem, we need to go back and fix that,” he said.
The possibility of potentially floodable properties being bought with open space money exists, but the state preservation trust fund is “woefully underfunded,” he said.
Hillsborough’s Christopher Obropta, an associate professor in the environmental sciences department at Rutgers University, detailed how low-tech solutions can make a difference. He talked about rain barrels connected to roof downspouts, porous pavement, dry wells and rain gardens as examples of practices that can, when used many times over, reduce or retard water going into rivers.
”And you’ll improve water quality, too,” he said.
”A waterfall starts with a single drop,” he reminded the audience.
For people dealing with potential or actual disasters on their properties, Jillian Stokely of the Federal Emergency Management Administration talked about the possibility of grants for flood proofing, raising the elevation of buildings and buyouts. She talked about actions a homeowner could take that could reduce the cost of flood insurance.
Alec McCartney of the state Department of Environmental Protection’s forestry program, said trees should be implemented in stormwater management plans. Trees absorb a lot of water and oxygen, he said, and 40 percent of water in a storm can be absorbed by leaves before the water even hits the ground. A red maple can absorb 400 gallons of water an hour, he said.
On the political side, the lobbying for money to complete the ongoing Army Corps of Engineers study got a boost from Rep. Rush Holt, who said federal funding will be tight.
Long-term, “We need to educate people about climate change,” he said.
It was “mystifying” why the issue had faded from the public consciousness, he said.
At the start of the day, state Sen. Barbara Buono, the frontrunner for the Democratic nomination for governor, stopped, looked at displays and talked with commission members.
What did he tell her?
”We need help,” he said. “We’re a small voice trying to get attention and have gotten lost in the Sandy aid discussion,” Mr. Jurewicz said.
”She said she’d look into it,” Mr. Jurewicz said.