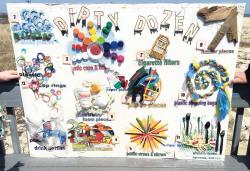 The “Dirty Dozen,” a poster of the top 12 types of debris littering beaches, was on display during an April 13 press conference on Sandy Hook held by Clean Ocean Action. KENNY WALTER/STAFF SANDY HOOK — Ocean advocates are hoping the 315,000 pieces of litter and debris collected during a pair of statewide beach cleanups in 2014 can serve as an educational tool for the public.

The ocean advocacy nonprofit released its “Dirty Dozen” report, an inventory of litter cleared from beaches during the 2014 Beach Sweeps.

The report documents the types and sources of the beach litter with the aim of educating the public and ultimately resulting in cleaner beaches.

“Instead of simply reacting, Clean Ocean Action would like to see proactive measures taken where and when we can stop [litter] at its source,” Tobin said.

“This is why our volunteer-collected data is so important. We use this data … to teach the public about what is washing up on our shores, as well as advocate for pollution prevention initiatives and laws.”

Tobin said the main source of debris on beaches is litter left by beachgoers and items discharged by storm events.

The press conference served as a review of the previous year’s Beach Sweeps results, as well as to encourage volunteers to help at any of the 70 locations hosting the 30th annual Beach Sweeps cleanup on April 25.

“The agenda was clean up and protect our most valued treasure: the ocean and our beaches,” Bruno said.

“The water was filthy with garbage and debris. The shoreline was littered with beach whistles, hypodermic needles, straws, plastic tires, trash and sewage.”

Before Beach Sweeps began in 1985, Bruno often questioned whether he even wanted to swim in the ocean because of the prevalence of pollution, he said.

However, through COA’s initiative — which included getting the community involved, lobbying legislators for stronger laws, getting the media involved and identifying the causes of beach pollution — the New Jersey coastline has improved dramatically, he said.

“The result of these actions is the beaches became cleaner and the water once again was clear,” Bruno said. “Now, I no longer ask myself whether to swim or not to swim.”

“As the program coordinator, I have spent the last few months analyzing our data from 2014 to create New Jersey’s all-local snapshot of trash on our beaches, lakes and streams,” Tobin said.

Plastic pieces once again ranked No. 1, with 40,880 pieces collected during Beach Sweeps in 2014.

“Many of the items are consistent with previous years,” Tobin said. “Plastic continued its reign in the ‘Dirty Dozen’ by being the most collected item in 2014, as it was No. 1 in 2013.”

Nearly 7,000 volunteers helped collect, tally and remove the pieces of debris from New Jersey’s shoreline during the 2014 Beach Sweeps.

“It goes in the ocean as one problem and creates many more problems as it breaks down,” she said. “Plastics in the marine environment never go away, as it breaks down into smaller bits and smaller pieces through wave action and sunlight.”

COA Executive Director Cindy Zipf said the origins of the organization are tied to the Beach Sweeps.

“We said, ‘We aren’t going to take it anymore — we can clean up the beaches by ourselves,’ ” Zipf said. “A small group of 75 people came out to Sandy Hook, and that was the beginning of Beach Sweeps.

“It’s become a tradition because there is so much pride in New Jersey beaches, and that’s what this is all about — citizen action that takes pride in our beaches.”

Tobin said the events also bring the community together.

“The Beach Sweeps statewide initiative is more than collecting garbage,” she said. “It is about being part of a collective citizens’ action while showing support for a clean ocean.”