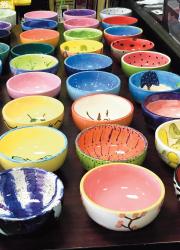 Empty bowls signify the issue of hunger in Monmouth County. A special event to raise money for organizations that feed the hungry in Freehold Borough will be held May 9. For Marlboro High School junior Tyler Merzer, an empty bowl serves as a reminder of just how many people go to bed starving.

And starving is not just an issue in other countries; it is an issue in a community as local as Freehold Borough, where hundreds of families are living in poverty, Merzer said.

“It is just unconscionable that people in my neighboring community can starve,” the young man said. “It’s inhumane.”

On May 9, Merzer will host an empty bowl event at St. Peter’s Parish House, Throckmorton Street, Freehold. Members of the community are invited to attend and for a minimum donation of $15 they will receive a meal of soup and bread, as well as a bowl to take home.

“On a symbolic level, whenever they use that bowl for anything or they see it, they will be reminded that hunger really does exist, and it really does exist in Freehold Borough,” Merzer said.

All proceeds will benefit the Freehold Area Open Door Food Pantry and Feed All God’s Children Soup Kitchen in Freehold.

The empty bowls initiative was started 25 years ago as a grassroots effort to raise awareness for world hunger. And for Merzer — founder of the My Hometown club, which raises awareness about local hunger issues — it is a cause that holds a great deal of significance, even if it is not something that is “trending” on Twitter.

The young man said he was alarmed by a Gallup poll from May 2013 that indicated the federal poverty threshold for a family of four is just under $24,000, and that such a family needs an income of at least $58,000 to get by.

“Hunger exists in Freehold Borough,” Merzer said. “There are more than 450 families that live in poverty, making less than $24,000 a year. And basically they are just normal people — you would not expect them to be hungry. They are people who work for minimum wages. They are seasonal migrant workers who don’t necessarily always have work, and there are people who may just have gotten a bad break.”

Food and supplies for the event have been donated by local restaurants, including Panera Bread, Perkins and Char Steakhouse.

In pursuing his goal to spread awareness about hungry families in Freehold, Merzer encouraged many of his friends throughout the Freehold Regional High School District to create a My Hometown group of their own.

Lauren Harrison, a sophomore at Colts Neck, was inspired to form a My Hometown group at her school after hearing about it from Merzer.

“I think helping other people is probably one of the greatest things you can do,” Harrison said. “I was really interested the first time he brought it up to me. … I was like, wow, I really want to do this. It’s just a great thing. It makes me feel good, it makes other people feel good, and it’s just helping your community and making a difference.”

The young woman said she is looking forward to the empty bowls event and plans to bring many of her friends with her.

“[Monmouth County] is such a middleclass area, you wouldn’t think that surrounded by Marlboro and Colts Neck that there is a lot of hunger in this area,” Harrison said. “People know there is hunger in other countries, but people are not aware of the hunger [here].”

The empty bowls event in Freehold Borough will run from noon to 3 p.m. May 9. For more information, email Tyler Merzer at merzer0827@gmail.com.