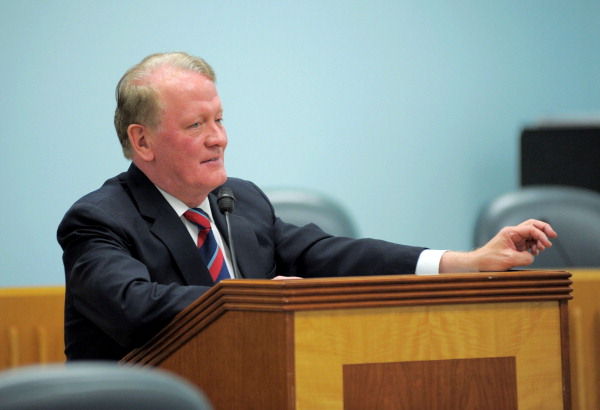 By Lea Kahn, Staff Writer
President Barack Obama’s proposed nuclear agreement with Iran may be a good deal for the Middle East country, but not necessarily for the United States or the rest of the world — and that’s why the U.S. Senate and the House of Representatives should reject it, according to U.S. Rep. Leonard Lance.
Mr. Lance (R-7th Legislative District) made it clear that this is his position, and outlined his reasons for opposing the agreement at a Town Hall meeting at the Montgomery Township Municipal Building Monday night. It was the second Town Hall meeting this month in which he discussed the pending agreement.
The district includes Montgomery, Rocky Hill and Hillsborough, along with towns in Somerset, Hunterdon, Morris, Warren, Union and Essex counties.
Many of the 50-plus attendees shared the congressman’s views, but there were also others in the audience who called on lawmakers to approve the agreement — even with its flaws, such as the inability to conduct “anywhere, anytime” checks on Iran’s nuclear program.
The agreement, which was also approved by the United Kingdom, France, Germany, Russia and China, does not dismantle Iran’s nuclear infrastructure, nor does it allow inspectors from the International Atomic Engery Agency access to nuclear sites on any “anytime, anywhere” basis — and not at all at military installations, Mr. Lance said. Inspectors can visit sites, but it is a lengthy process to gain permission to visit them.
“If history is any judge, (the Iranians) have not been persons of their word. I think we should be able to inspect (the various nuclear facilities) anytime,” Mr. Lance said. If they are smart, however, they will obey the agreement for a couple of years, he added.
The agreement also lifts restrictions on military arms sales to Iran. It can have intercontinental ballistic missiles, which Ashton Carter, the U.S. Secretary of Defense, has said have only one purpose — to attack another country, which is an act of war, Mr. Lance said.
And the agreement lifts economic sanctions on Iran, resulting in a $100 billion windfall in proceeds from oil revenues that have been frozen in foreign bank accounts. Iran also can begin exporting oil, Mr. Lance said.
“The question is, what will Iran do with the money? We all hope it will use the money to better the lives of its people,” Mr. Lance said. President Obama has admitted that it is likely that Iran will use the money to support terror groups, instead, he said.
Mr. Lance said the agreement must be approved by the Senate and the House of Representatives in a vote that will likely occur in September. He said that in his own view, both legislative bodies would reject the agreement. In that case, it will go to the White House. The president can veto their disapproval.
If that were to happen, it would take a vote by two-thirds of each house — the Senate and the House of Representatives — to override the president’s veto, he said. There may not be enough votes for that to occur, he said, pointing out that nevertheless, a future president could try to amend the agreement.
One attendee urged Mr. Lance to “reach across the aisle” to line up as many votes as possible to defeat the proposed agreement, which is structured so that Iran gets what it wants up front. The agreement could set off a nuclear arms race, she said.
Mr. Lance said he has friends across the political aisle. It is a very difficult issue for Democratic lawmakers, he said, because they want to support the Democratic president. He praised U.S. Sen. Charles Schumer, a New York Democrat who has come out against the deal.
Cranford resident George Sexton, who said he has had family members who have lived in Iran, told Mr. Lance that he favors the agreement. He asked the congressman whether the United States is safer with no agreement, or a flawed one.
“I think we are less safe with this agreement than with no agreement,” Mr. Lance said.
When another attendee said he thought the Iranian people are “pretty decent” and that change would be possible if Iran was not “hamstrung” by nations that feel they have to exert their own superiority, the congressman replied that Iran’s leadership is “horrible” and there are no signs that the leadership is going to change, he said. The people are good, however.
Rabbi Shmaya Krinsky of Hillsborough Township reminded Mr. Lance that people tend to forget what occurred in the 1930s in Europe. No one believed that there would be a holocaust, he said. The Iranians have repeatedly said they would wipe out Israel and they chant “death to America,” he said, questioning how this agreement could be approved.
“I cannot answer your question,” Mr. Lance said. He said he would have liked to continue to negotiate to reach a better agreement — one that does not include the ability to have intercontinental ballistic missiles, an “anytime, anywhere” ability to conduct inspections for compliance, and a gradual lifting of sanctions — “no signing bonus.”
“I think this is a work in progress. I think it is the most important foreign policy issue since 2009,” Mr. Lance said. That is the year that he first took office in the House of Representatives. 