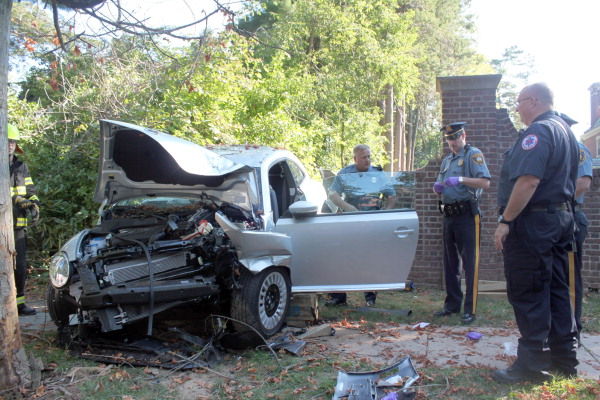 By Lea Kahn, Staff Writer
A Princeton man died Wednesday night of injuries he sustained earlier in the day after the car he was driving struck another car and a tree and then bounced into a brick wall on Library Place, according to the Princeton Police Department.
Donald E. Capps, 76, of Nassau Street, was pronounced dead at 8:54 p.m. at Capital Health Regional Medical Center, police said. He retired from the Princeton Theological Seminary in 2009, where he was the William Harte Felmeth Professor of Pastoral Theology. He joined the seminary faculty in 1981.
The accident occurred shortly before 9 a.m. Wednesday. Mr. Capps was driving a 2015 Volkswagen Beetle north on Library Place, between Mercer Street and Stockton Street, police said. Mr. Capps’ car passed several cars in front of it that were also traveling north on Library Place..
Mr. Capps’ car continued across the intersection of Library Place and Stockton Street, where it struck the right rear bumper of a 2010 Volvo XC70 that was also traveling north on Library Place, police said. After striking the Volvo, the Volkswagen hit a tree and bounced off it and into a brick wall surrounding a house on the corner of Library Place and Stockton Street.
Mr. Capps had to be extricated from the Volkswagen by the Princeton First Aid and Rescue Squad, police said. He suffered serious injuries to his upper and lower body and was taken to Capital Health Regional Medical Center. His front seat passenger, Karen Capps, 73, of Nassau Street, complained of pain in her upper body and back and was also taken to Capital Health Regional Medical Center.
The driver of the Volvo, 63-year-old Sharon M. Worthington of Bullock Drive, was uninjured, police said. There was minor damage to the Volvo, and Ms. Worthington was able to drive it away from the scene. The Volkswagen, which had heavy front-end damage, was towed from the scene.
The cause of the accident remains under investigation, police said. 