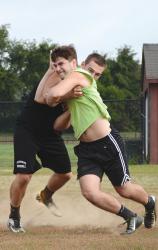 Allentown High School football players Colin Roy, right, and Ricky Mottram mix it up during a practice as they work toward the start of the 2015 high school season. The Redbirds return home Sept. 11 against Notre Dame High School. REBECCA NOWALSKI Allentown High School’s football team got an early jump when it opened its season Sept. 5 against perennial Pennsylvania powerhouse Archbishop Wood Catholic High School, which is located outside of Philadelphia. Another tough challenge awaits in the Redbirds’ home opener Sept. 11 against Notre Dame High School, the alma mater of coach Jay Graber, whose Redbirds won last year’s game, 30-0.

Allentown was able to arrange the opener after agreeing with Steinert High School to cancel what was expected originally to be a nondivision opening game. Steinert instead picked up a home game against Bishop McDevitt High School from Harrisburg, Pennsylvania, Sept. 26

Allentown had played in the Valley Division, won three championships and is rated a preseason favorite in the Colonial Division.

Quarterback Michael Curry finished his season with 1,475 rushing yards and 1,169 passing yards and is off to a college career at Johns Hopkins University. He was one of seven Allentown graduates selected to play in the Sunshine Football Classic all-star game July 1 at The College of New Jersey, along with wide receiver Kevin Locke, who is going to Monmouth University; running back Jake Alessi, who is going to Salisbury University after rushing for 799 yards; linebacker David Krieg, who is going to Pace University; kicker and punter Matt Derisi; and wide receiver Jake Morse. In all, 12 players graduated from last year’s team.

Graber believes the string of success in recent years has helped change the culture, which he set as his goal when he became head coach five years ago.

“I think that our players have a lot of self-motivation and determination, not just in football but in everything that they do,” Graber said.

Jordan Winston, a junior who comes off a solid summer, is the quarterback. “He’s very talented, can throw the ball very well and runs well,” Graber said. “He has a good command of the offense and what we’re doing.”

Juniors Aydon Chavis and Joe Mannino and sophomore Malcolm Milton also are running the ball. Senior Brett Masci has some experience at wide receiver along with Rob McClees. Seniors Shane Duffy, who is a younger brother of former Allentown star Mark Duffy, and Samir Queen and sophomore X’zavier Harris also have worked out at wide receiver during the preseason.

Although they are relatively untested, they have an experienced line blocking in front of them. Seniors Ian Grant at left tackle, Joe Pritchard at left guard, Matt Schreck at center, Drew Whalen at right guard and Taylor Campbell at right tackle all started last season. Juniors Ryan Huth and Jacob Kobstad will rotate into the lineup.

The defensive front also carries most of the experience in the 4-3 rotation, where three of the four returning starters play, including seniors Makelli Quinones and Pritchard at tackle and Sam Beckett at end. Huth and Campbell are in the running for the other end spot, and Grant will rotate in at tackle.

Mottram is joined at linebacker by Whalen and junior Colin Roy. Sophomores Liam McDermott and Max Boyle are young but capable backups who can step onto the field as Mottram did as a sophomore last year.

Winston doubles on defense with five other players who are interchangeable at defensive back or safety. Others are Masci, Mc- Clees, Chavis, Milton and junior Ryan Locke.

New kicker Matt Fritsky is breaking in well as the successor to Derisi, and Winston is handling the punting.